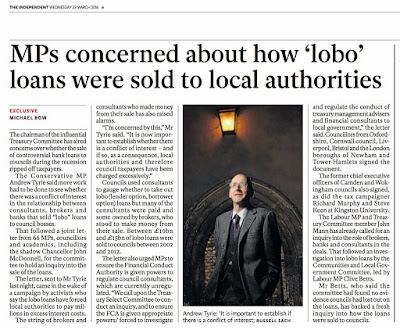 This letter below was sent to the Chair of the Treasury Select Committee and signed by a number of different people including Shadow Chancellor, John McDonnell MP, former Council Chief Executive, Academics, trade unionists, Campaigners and Councillors (including me).

The Banks and financial advisers have ripped off local authorities up and down the country. It is a national scandal and due to legal time limits - urgent action is needed.

Re: Lender Option, Borrower Option (LOBO) loan lending to UK local authorities and conflicts of interest between brokers and advisors
We are writing in response to coverage of Lender Option, Borrower option (LOBO) loans sold to local authorities and housing associations - exposed by Channel 4 Dispatches and recently covered by the Evening Standard, The Independent and Financial Times 9-12 March, where banks are reported to have made up-front trading profits of £1.5 billion.

We believe it is important to understand how 250 local authorities came to take out at least £15 billion in LOBO loans, containing embedded derivatives. Since the 1989 Hammersmith and Fulham swaps case, the use of derivatives by UK local government has been potentially unlawful.

LOBO loans are described by the Chartered Institute of Public Finance and Accountancy (CIPFA) [April 2015] Bulletin as “inherently risky” products.

We note that this is the third time in eight years there have been calls for a Financial Conduct Authority (FCA) inquiry into Brokers and Treasury Management Advisors to local government, the last occasions being during the 2008/09 Icelandic banking collapse when councils lost £1bn on deposit, and in July 2015 following the Channel 4 Dispatches expose of LOBO loans in “How Councils Blow Your Millions.”

On each occasion, calls for the FSA/ FCA to investigate the conduct of regulated Treasury Advisory firms it supervises, including Capita and ICAP were ignored, with DCLG accusing The FSA in 2009 of: “deliberate obfuscation [119].”

As councillors, MPs, citizens and civil society organisations, we wish to lend our voice to calls from MPs John Mann and Clive Betts for an inquiry into LOBO loans, and the conflicts of interest between Banks, Brokers, and Advisors who promoted them, by the Treasury Select Committee (TSC) and The FCA, and demand a financial system that operates in the interests of society.

At the heart of this matter is the assertion by regulators, acting under FSMA 2000 that local authorities are “sophisticated” investors, able to transact safely with global investment banks and brokers selling derivatives products, including LOBOs.

A string of municipal swaps and derivatives mis-selling legal cases across Italy, France, Germany, Portugal and Belgium are testament to the fact that local authorities were not in a position to safely use complex products like derivatives, and could not be accurately described as “sophisticated” investors with full understanding of derivatives risks.

Banks pitched highly complex, opaque and risky products such as ‘inverse floaters’ and ‘range LOBOs’ which were inappropriate for the needs of local authorities. In the case of Newham council, this has had a significant adverse financial impact on its position.

Unlike professional investors such as Hedge Funds, local authorities did not understand the inherent risks with LOBO loans, being reliant upon external Treasury Management Advisers - who received undeclared income streams in the form of commissions from brokers when councils borrowed from banks.

Brokers held themselves out as offering best execution services for local authorities and prior to 2009, failed to disclose relationships with treasury advisers and banks.

It should be remembered that local authority finance is entirely unregulated, and that ultimately, it is local taxpayers picking up the tab when councils are mis-sold risky financial products.

With the closure of the Local Government Audit Commission in 2015, severe cuts to Town Hall budgets since 2010, and plans outlined in the Devolution for Cities agenda granting additional financial powers to local authorities, it has never been more important to stamp out market abuse along the financial advisory chain to town halls.

CIPFA and the Department for Communities and Local Government (DCLG) both assert that it should be The FCA, not councils, which investigate and regulate the conduct of financial consultants and advisors to councils.

We call upon the Treasury Select Committee to conduct an inquiry, and to ensure The FCA is given appropriate powers/ forced to investigate and regulate the conduct of Treasury Management Advisors and financial consultants to local government.