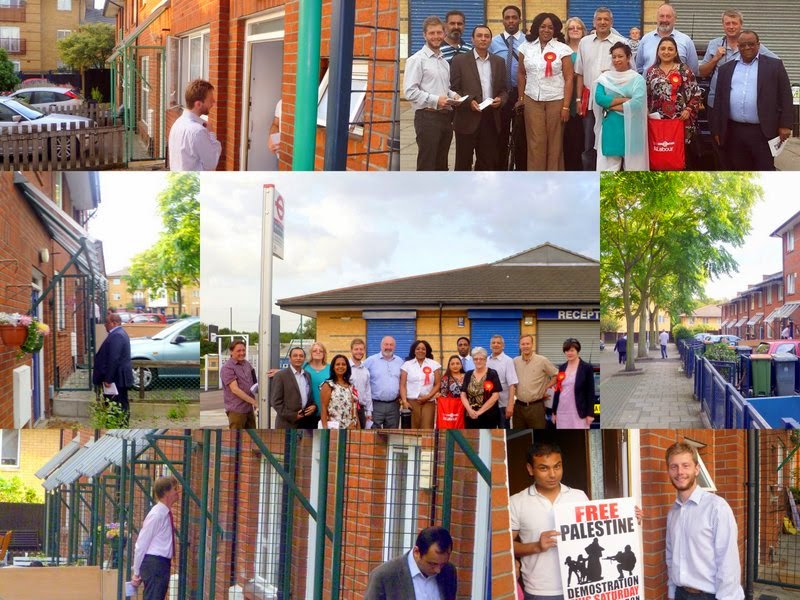 Last night I joined the Labour Candidate for the Newham Council Beckton By election, Tonii Wilson, for a doorknock in the Windsor Park Estate. Tonii will make an excellent candidate for the ward. Local MP Stephen Timms also joined us

It was touching that so many residents told us how upset they were at the unexpected death of Cllr Alec Kelloway. Many people knew him and recounted what he had done to help them.

I went with local Councillor David Christie.  There was a very positive Labour response. While there was a number of complaints about local social landlord, East Thames Housing Association, failure to maintain the local environment, I actually thought that there had been an improvement to the area in recent years but obviously there needs to be more done.

I understand that there has been a number of high profile evictions of criminal residents in recent years which have had a significant positive impact. Good.

I must admit to being intrigued about the unusual street names in the area such as "Warwell" and "Horse Leaze". No-one seemed to know why. I am sure Alec would have known and told me exactly why.

I spoke to a very sensible young man who had been born and brought up on the estate who agreed that there had been improvements but thought that there needs to be more youth services in the area. I see the local community centre has now been closed by East Thames?

I'm sure that Tonii and the current Councillors, David and Ayesha will be doing what they can to improve services.

I will post a personal tribute to Cllr Alec Kellaway in the near future.

"I understand that there has been a number of high profile evictions of criminal residents in recent years which have had a significant positive impact. "

On previous responses, you have denied there is major criminality and ASB issues on housing association estates. Now you heard it yourself.

You have said in the past inequality is the reason for ASB, but East Thames tenants where the lucky ones with new housing, new roads, new schools. They didn't live in a horrid 1960s council block or high rise tower. So why did get so bad - they had to evict the most serious offenders.

The neighbourhood looks better then other parts of Newham. So why would they engage in ASB and criminal behaviour?

Whether you take the approach of building a large housing association estates or "pepper" people around as Ken Livingstone suggeted (as in the case of LocalSpace etc..). You still end up with ASB.

It one takes one household to drag the area down....

I doubt simply moving criminals around one place to another solves the issue. There is something wrong with Socialism, - this is even if you do something nice for someone (e.g. given them a new house) - they will never be grateful to the taxpayers who paid for their privileged.

Sir Robin Wales referred to this specific estate as a "Ghetto".

What a load of nonsense anon! I have never said that there has not been problems in estates. What I have challenged you about is your labelling of all residents as criminals. Which is untrue and frankly ignorant.

Some of the most serious criminals I have had to deal with as a housing officer have brought their own homes. Does this make every home owner a thug?

You also have no concept of socialism. It has nothing to do with charity. If you wish to live in a society that is getting more unequal then don't complain about crime because it will just become worse and worse.