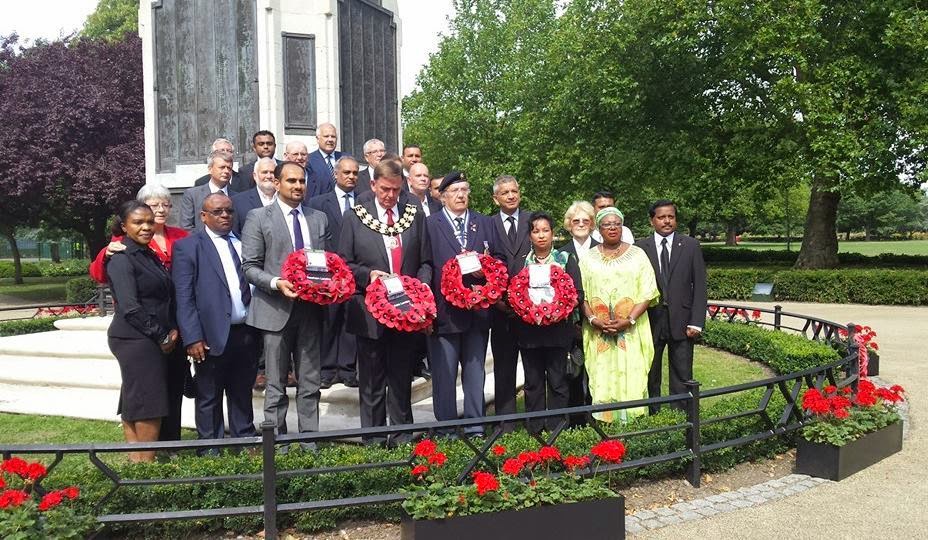 This morning at 11am I went to the Cenotaph at East Ham Central Park for a Newham Council ceremony to mark the 100th anniversary of the beginning of World War One.

A British Legion representative laid the first wreath followed by the Mayor and representatives of the former boroughs of East and West Ham.

One lovely spontaneous touch was as the wreaths were being laid, a passerby stopped and started singing a beautiful lament to the fallen "Sleep on Beloved, Sleep on and take your rest".

My Grandfather, Frederick John Matthews MC, Royal Naval Division, fought in the First World War. On 5 August 1914 he was still an apprentice "mechanical engineer and draughtsman" in a South Wales Steel works. He left to join up on 2 September 1914 and returned to work (briefly) in January 1919.

I hope in the coming years to follow in his footsteps a hundred year later, starting off next  year at Gallipoli in Turkey then the trench battles of France and Belgium.

Although not wishing to deny the sadness and misery brought on by The First World War, perhaps a more appropriate song would have been "The Green Fields of France" by Eric Bogle.
I suppose it makes sense in a way for you to blog this, just like the Invasion of Iraq, Labout was beating the Recruiting Sergeant's drum in 1914 as well.
I know in the past you have trivialised the SPGB, perhaps you would do well to read their new publication "Strange Meeting - Socialism and World War 1", you might learn something.

The Green Fields is a great song but not sure it would have worked as well as "Sleep on" in the particular circumstances?

You are wrong about Labour in 1914. The Party was split (as it was over Iraq). I was reminded of this famous photo http://grayee.blogspot.co.uk/2011/03/happy-birthday-labour-party-111-not-out.html of Keir Hardie addressing a large peace rally on August 2 1914.

I don't think I have "trivialised" the SPGB in the past?

I may have poked fun at them but you know that the SPGB is of no political consequence whatsoever and has "trivialised" itself?

I find most different political views interesting and will add "Strange Meeting" to my (long) reading list. Sorry, but from the stuff I have seen so far from SPGB I doubt I will learn much.

Mind you I did use to enjoy Robert Barltrop's weekly articles in the Newham Recorder on East End history.

I appreciate from reading your blog that you struggle to learn much.
Perhaps something from Richard Headicarr's recent work might help:

"Although there were 16,000 individuals who, commendably, took a stand against WW1, it was the Socialist Party of Great Britain alone who did so unequivocally as a matter of political party policy. We argued that this conflict was not caused by the assassination of Archduke Ferdinand, or by German military imperialism, or by an arms race. These happenings were offered as justification at the time, but were nothing more than the consequences of a deeper underlying and ongoing cause. Sadly, truth is not a requirement for ‘A’ Level history. The abiding reality is that this war, as others before it and since, was the result of the ever-present struggle by competing national powers and alliances for territorial supremacy and market dominance. Nothing has changed!
WW1 was not only the inevitable result of rampant class-riddled capitalism, but it provided graphic evidence of the obscene lengths to which those who support such a system are prepared to go to perpetuate it. This ridiculous war involved over 30 countries and resulted in over 9 million soldiers being killed and 21 million injured. ....... an act of genocide by the Turks eliminated 1½ million Armenians. In addition, of course, it brought untold grief to thousands of families. Nothing was resolved by the war; it ended in stalemate rather than checkmate. But further seeds had been sown that would yield an even more destructive conflict.
Few, if any, lessons have been learned about the fundamental flaws of a society which continues to be run by a few to the detriment of the many. For as long as the abundant resources of our planet are exploited for profit rather than produced for need, wars will continue. Just as the Socialist Party has been pointing out for over a hundred years. We will keep on doing so until common-sense prevails"

I'd rather be a member of a truth telling political party (of no consequence) with a heritage of opposing the futile spilling of working class blood. Than spout Labout apologies of "we didn't all agree with it"

ps Bob Baltrop wrote some interesting things and was a bloody good boxer, but more than a pinch of salt might be needed if you took everything he said (and wrote) seriously.

Actually the spgb wasn't the only tiny sect to oppose the war. There was plenty of other weird and wonderful cult like extremists who pretended to be opposed to the war. The trouble is that one of the major reasons for the war was the ignorant and bigoted views that you so exemplify.

The belief that there is only simplistic solutions to all world problems that only the enlightened know about while everyone else is too stupid to realise.

You must realise you are wasting your life on such stuff and nonsense making "angry" anonymous comments on obscure blogs.

Bob realised that he was taken in by a cult like organisation that made scientologists seem sane and rational. Hopefully, one day, you too will see the light.