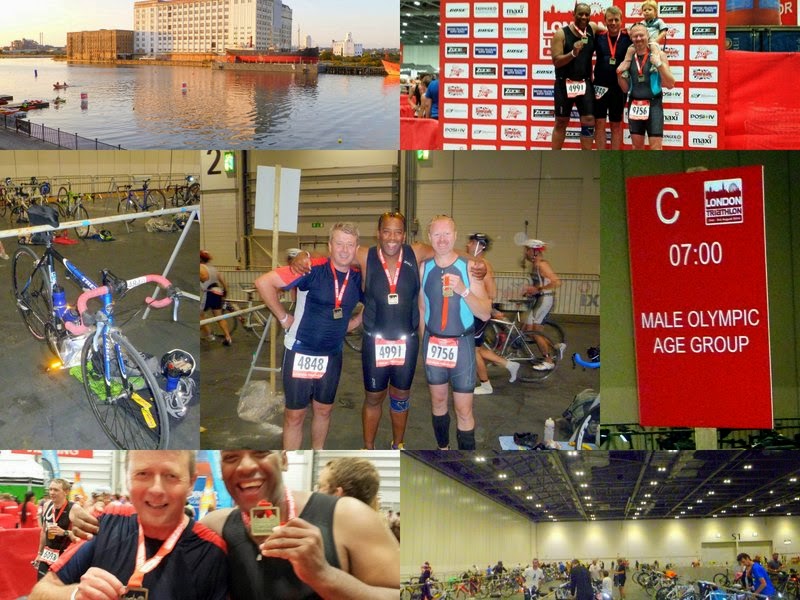 Off message but I have now just about recovered from completing the London Triathlon on Sunday.

I got "talked into" taking part by my very enthusiastic Newham Councillor colleague, "Red Terry" Paul, who had completed in other triathlons and was trying to get Councillors and officers to take part. I was the only one foolish enough to agree!

I must admit it seemed a great idea in January when it was ages away but less so as the day of the event approached.

We had entered the Olympic distance event which is a swim in the docks for 1.5km, followed by a 40km bike ride and then a 10km run. The open water swimming was the thing that worried me the most. I hadn't swam for about 10-15 years following an accident and while I knew I could swim that distance in a swimming pool, I was unsure about doing so in open water and while wearing a wet suit.

I also did not have a bike, Terry resolved this problem by selling me his old one last month.

Sunday started very early at 4am for me and at 5am I was cycling through the streets of Forest Gate to meet Terry and his brother-in-law, Andy Townsend (who was also competing) at his home in Canning Town. At 5.15 we were all cycling to the venue.

Our start time for the swim was 7am and we were expected to be at venue in the ExCel centre for 5.30am. We got there, collected our tracking "chip", "racked" our bikes and laid out our kit on the floor for the various "transition's" (from swim to cycle then cycle to run). We met up with Labour MP Gareth Thomas who was also taking part and in our "wave".

At around 6.30 we put on our wet suits and went off to the assembly area. There was 380 men in our wave which the organisers thought was too many for safety reasons so they separated us into 2 groups. Eventually we went down and jumped into the water in Royal Victoria Docks.

The docks water was actually cleaner than I expected and not salty. I didn't join in the mad rush at the start and actually had quite a slow but enjoyable swim around the docks. The great thing about wet suits is that not only are you warm but you are very buoyant in the water so even if you are not the greatest of swimmers, you feel quite confident.

The 40k bike ride was also better than expected. The weather was lovely and cycling past the Tower of London and along the Thames to almost the Palace of Westminster was a treat. The only downside was the hordes of people who flew past me. At times I felt I was on a stationary exercise machine. The super fast guys with the very expensive carbon bikes sounded as if they were on motor bikes and who shouted to everyone to get out of their way - "move to your left!" or "on your right!".  Needless to say I was always "on the left" and didn't need to move.

At the end we met up with Terry's partner Sarah (known to us in Newham for obvious reasons as "Saint Sarah") and her sister (Andy's wife) Rachel and their lovely children Rowan (aged 2) and Princess Lucy (aged 3).

We all walked back to Caning Town pushing our bikes and I then cycled back home to Forest Gate.

I had been really dreading the day but ended up (mostly) enjoying it. It was much, much better (and far less painful) than the running half and full marathons I have done in the past. It was also great to start swimming and cycling again.

Hope I keep up with the exercising and I am now actually looking forward to my next Triathlon.
Posted by John Gray at Wednesday, August 06, 2014