UNISON NDC 12: Defend the attacks on health and safety standards 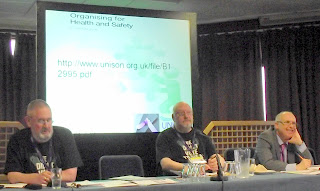 On Thursday lunchtime I went to this fringe. UNISON National Health and Safety Committee Chair Nick Green chaired, John Bamford, Health and Safety Adviser, Greater Manchester Hazards Campaign spoke first. Followed by Robert Baughan, National Officer for Health and Safety.  Who is deputising for Hope Daley who is on a secondment.

During the fringe I made comments on some key points on Twitter again which I have used on this post. It saves making notes.

John started by arguing that there is "no evidence that health and safety is a burden to to business. Evidence instead that it is a benefit to business". "Today it the Longest day. We now have had 3 longest days since Cameron became Prime Minister and 700 long days to come".

"The "Brown Book" which contains the 1977 Safety Representative & Safety Committee regulations is the most powerful piece of worker legislation in existence". Regarding the new "Fit notes" for people off sick. John said that the only decent one he had seen was the one from a GP that said an employee can return to work "if the employer sacks the manager that is bullying him".

There has been a "1/3 cut in proactive safety inspection" by the Health and Safety Executive (HSE). Tories are now talking about "Getting rid of all safety protection for "low risk" self employed". The "Tories argue that work is not dangerous anymore! The TUC estimate 20,000 work related deaths per year. While Hazards believe that it may be as high as 50,000 deaths"

Robert spoke about how we cannot rely on the HSE. Many of their officers are very good but it is fighting for its survival. In the Q&A I made the point that not only are cuts to the HSE making work more dangerous but that in my sector front line housing staff will take the blame for trying to deal with the cuts in Housing benefit as will other local authority staff dealing with the impact of government cuts. Check out the Inside Housing report here.
Posted by John Gray at Sunday, June 24, 2012