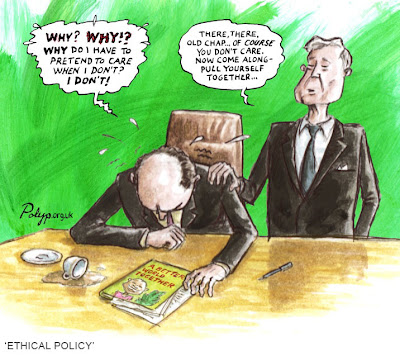 Last Tuesday evening I went to a seminar organised by the Pension Investment Academy and the University of Westminster Business School(Marylebone Campus) via the AMNT. The seminar was about whether responsible investment and engagement approaches actually work. Which is a pretty fundamental topic I posted on recently here.

Why I believe as a pension investor and trustee that investments should be made in a social responsible manner. I have to ask what empirical proof or evidence is there that such a policy actually achieves a positive return especially when compared to investments on behalf of those who don't worry what happens to their investments as long as they make money.

I can remember being told many years ago that it is the duty of pension trustees to maximise the performance of their fund and nothing else. Which is clearly nonsense (then and now).

There was a pretty high powered panel of speakers from the Pension Protection Fund, Mercer, BT Pension fund and Henderson Global Investors.

The good news is that it seems that there is now research that engagement can add to returns and could reduce risk and volatility. However, the evidence is so far patchy. Certainly there is the argument that such active stewardship in Banks could make a "rerun" of the recent global banking disaster "materially less likely" (Walker Review 2009).

In the Q&A I did respond to the points made by some members of the panel that voluntary regulation is better than the state being involved, by saying that the lessons from the Banking crisis is that laissez faire capitalism failed and that you need more state regulation not less.

Also that until our investment advisers start advising trustees that it does make financial sense for the fund to be active then most trustees will not have the confidence to do so. Many fund managers (not all) in my experience see SRI as a unnecessary interference  in their right to manage money as they see fit. They simply pretend otherwise to win and keep business.  Regardless of the Stewardship Code you will need the support of your advisers to take them on.

(I spent 3 years on a day release at the Westminster University site in the late 1990's to do a CIH post-graduate diploma. It was nice to be back but due to expansion and building works the campus is now unrecognisable).
Posted by John Gray at Thursday, June 07, 2012