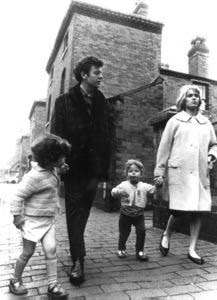 Above is a quote from a Shelter trade union member who contacted me following the overwhelming vote by Shelter staff to strike. Last month I posted on the dispute between the Housing Charity Shelter and its employees over its plans to cut terms and conditions and to make staff work longer for no extra pay. I really hoped that this dispute could be resolved quickly since Shelter does marvellous work for its many vulnerable clients.

However, this is not to be and members have voted by a majority of 71% (on a very relatively very high turnout of 65.8%) to strike. Shelter has threatened to sack staff who do not accept these cuts.

The first strike is on 5 March 2008. Must find out the nearest picket line?

Ken Loach (the film director who directed “Cathy Come Home” which is credited with helping to launch “Shelter”) has been interviewed in the Guardian calling for people to stop financially supporting “Shelter” until this dispute is resolved. Not sure about that one? No mention of such a call in the T&G website? I’ll go with what the unions advise on that one. See Shelter boss, Adam Sampson response.

It would appear that a cause of this whole disaster is that Shelter management (who may or may not be paid huge amounts of money but do seem to be fond of paying large amounts of money for “change consultants” and expensive refurbishments of their head office) are fearful that unless they can cut staffing costs they will be uncompetitive and lose legal aid contracts to the “evil ones” such as outsourcing giant “Capita”. This is serious issue across the public/private sector. Is it right that organisations can lose contracts to firms that do so by simply slashing the wages of existing staff? Doesn’t TUPE apply? Should new starters also be protected under TUPE? Should the new Warwick Agreement between the trade unions and the Government include all such contracts? (YES).

By co-incidence during the Labour Party conference last year, at the UNISON Housing fringe, Adam Sampson, was a panel speaker alongside the then housing Minister Yvette Cooper and the UNISON Head of Local Government, Heather Wakefield. During the Q&A I asked Yvette to respond to Heather’s comment about excessive pay rises for senior management in many Housing Associations. Yvette appeared to be concerned about the unfortunate tendency for these managers to pay themselves very large pay rises and said that the government was aware of the issue and will take firm action to stop it if necessary. Interestingly Adam also piped up with an attack of such housing associations, since he claimed that their actions meant that Shelter had to pay more money to recruit senior staff. This he said was causing financial problems across the voluntary sector.

So Adam, is the reason you have to cut the terms and conditions of relatively low paid staff due to money you think you have to pay to recruit senior executives? I think we should be told.....
Posted by John Gray at Tuesday, February 26, 2008

..excessive pay rises?...what about Michael Martin? Who got himself voted into the position of speaker for a second term against hundreds of years of democratic custom..what about our overpaid, over bloated socialsit MP's..airmiles, allowances for houses they alreay own? Disgraceful.

Blimey anon – stop being so silly –
what on earth has the HofC speaker got to do with all this? On Labour home Rwendland has made an excellent comment to this same post http://www.labourhome.org/story/2008/2/26/163659/702#2

it's not just the hypocracy of the pay cuts (and increased hours) for the shelter staff versus managers' inflation busting rises - it's also the threats and intimidation being used against Shelter's highly skilled and highly dedicated workforce. Worst culprit is Adam Sampson - as well as sending threatening and intimidating emails to staff over the new contracts (ie do it or be sacked) he's also threatening staff over striking: veiled threats about police involvement, he's getting managers to demand proof of illness on the strike days and banned all annual leave for those days. Not to mention getting into some really childish taunting of the union officials. Pathetic. How can such a disgrace of a man get to be the head of a caring charity? All for the CV no doubt. This mercenary is going to ruin ome of the most vital charities in the country while raising his own profile in the press spouting hollow indignation about how government policy will affect society's most vulnerable. How vulnerable will they be without shelter advisors to fight their corner?!

I understand Adam is being coy about his salary, but looks like he was willing to tell the Times recently: