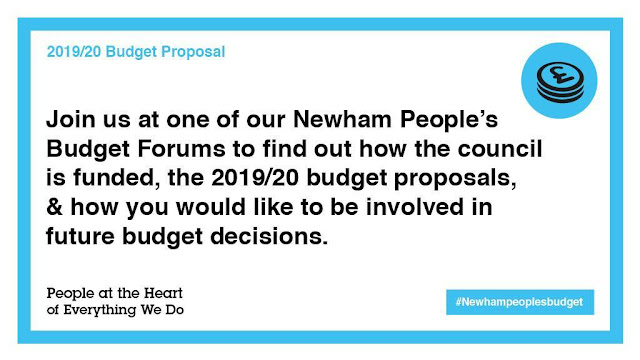 Hat tip Newham Council - Mayor Rokhsana Fiaz and her Cabinet members have listened to the views of residents and put forward proposals for how Newham Council intends to spend money on what people say is important.​​​​

join us at one of our Newham People’s Budget Forums to find out how the council is funded, the 2019/20 budget proposals, and​ how you would like to be involved in future budget decisions.
To register for your place, visit www.newham.gov.uk/PeoplesBudgetForum or email any comments to Peoples.Budget@newham.gov.uk​.

The Mayor presented her initial 2019/20 people’s budget proposals to Cabinet which include:
The proposed investment is influenced by what residents have said, during Citizens’ Assemblies, is important; what councillors say residents have told them are the things they value; and from discussions with partner organisations. The final proposals will be considered by Full Council in February.
Mayor Fiaz said: “Over the past six years, the Government has drastically reduced the funding that we use to deliver services for our residents by almost £91m. In 2019/20 we will need to save at least another £8m lost from Government funding, and we can expect to have to save more in the years after that.
“What we decide now will provide us with a new and different type of budget. It is set to be truly transformative and would allow us to make some of the most radical changes this council has seen in years to the benefit of Newham residents. As well as delivering on manifesto promises, what is being proposed is what residents are saying are priorities; it is a people’s budget.
“And we cannot just think about next year; this has to part of a people’s budget process across the whole four years of this administration. The 2019/20 budget is a transitional one and, if approved, will be a balanced budget.”
To support the 2019/20 proposals, the council needs to make some tough decisions, including a proposed increase in Council Tax of 2.9 per cent alongside a two per cent rise in the precept towards the costs of providing adult social care, while at the same time reducing the burden on those least able to pay.
Councillor Terry Paul, Cabinet member for finance, said: “In terms of cold hard cash, this would mean asking residents for just 89p extra per week at Band D properties to cover the proposed increase in the Newham element of Council Tax. Alongside a planned programme of savings, this will give residents access to a whole raft of additional benefits in services as well as not having to reduce what we spend on libraries, parks, street lighting and cleaning, road repairs and leisure services for example.”
“Newham Council hasn’t asked for any extra Council Tax from residents for the past ten years. This has meant £82m has been unavailable to us that we could have spent on vital services. Whatever we decide, we will make sure the right support is available for the families who are the least able to pay. We will also continue to save as much money as we can by being more efficient in everything we do.”
To protect vulnerable residents against the proposed increase, the Mayor is looking to increase the support available to 19,000 lowest income families with a variety of measures including extending support to tenants dealing with bad landlords and making care leavers exempt from paying Council Tax until the age of 25. There are also proposed changes to the Council Tax Reduction Scheme, which could reduce the amount eligible residents have to pay in Council Tax to just 10 per cent of the bill, potentially saving them almost £120 per year.
Listening to residents is part of the council’s commitment to openness and culture change within the authority. Mayor Fiaz added: “Our successful Citizens’ Assemblies have told us what our residents value. We have listened and this budget will enable us to build on what we offer.”
There will be Citizens’ Assemblies in January for residents to have conversations about the budget proposals. Details will be published on this page www.newham.gov.uk/newhampeoplesbudget​
Residents can offer their views on the proposed change to the Council Tax Reduction Scheme through an online survey until 16 January. Currently, households eligible for the scheme pay a minimum of 20 per cent of their Council Tax bill. The consultation will ask whether this should be reduced to 10 per cent, 15 per cent or stay the same.
To take part in the consultation, visit www.newham.gov.uk/CTRconsultation or if you have any questions or would like to request a paper copy of the questionnaire please email CTRconsultation@newham.gov.uk​

(who can say politics doesn't matter)
Posted by John Gray at Wednesday, January 09, 2019