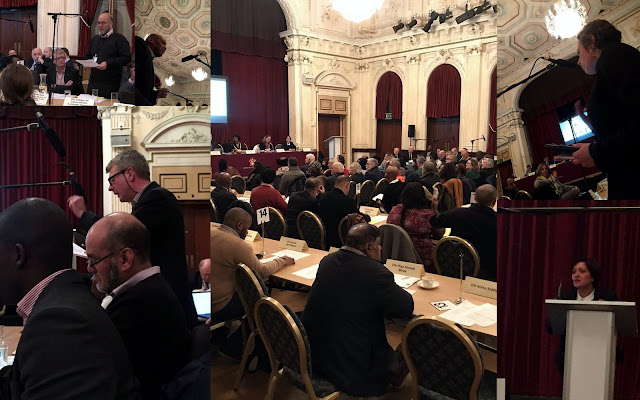 This is my speech to the crowded meeting on Tuesday where I moved a report with recommendations on why we had a £9 million overspend on RMS, what we did about it and what we are doing to make sure this never happens again.

"Thank you all for attending this extraordinary meeting.

The Chair has kindly agreed to hold this meeting in the spirit of openness and transparency to give councillors the opportunity to discuss the Council’s investigation into the allegations about the Council’s Repairs and Maintenance Service and also the completely unacceptable financial losses we have suffered.

There have been a number of inaccurate reports into this issue and the Internal Control Commission that the Mayor has announced will be investigating how this happened.

BUT even more importantly it will be looking at whole Council systems so that we can ensure this never, ever happens again. This is not isolated incident. We have suffered similar losses in the East Ham campus overspend (& being ultra vires), London Pleasure Gardens losses,  the Children services overspend and of course, the Olympic stadium debacle.

We want to create an effective system of internal controls, establish clear checks and balances and make Newham Council a beacon of best practice.

I will give a short outline of what has occurred. Then my cabinet Colleague, Cllr Ali, who is currently the lead member for Highways will give a more detailed information about what happened,

The RMS service was established in 2011. It is wholly owned by the Council and subject to Council financial procedures.

It has 4 key functions:

In 2016, the Cabinet approved the "Keep Newham Moving Programme", a £100M investment over 10 years in highways. It agreed that RMS would undertake this work.

RMS had been identified as being subject to the Newham Council Small Business Programme which meant it was due to be externalised and therefore was told that they had to stop being Council bureaucrats, take risks, be entrepreneur and win new business.

At the time it was recognised that giving them these contracts was potentially risky since RMS had not undertaken such major highway works beforehand and certain measures were supposed to be put in place to control this risk.

By golly did they take risks, the senior management at RMS put a bid to the Council to carry out these works at a price far below what was actually needed to deliver it.

After this blunder RMS had to sub-contract these works to private contractors at a price far above the money they should have received from the Council. This resulted in a loss of £8.78M.

A number of serious allegations were made about financial mismanagement, including a whistleblower in June 2017.

This resulted in an investigation not only by qualified investigators, our internal audit but also two external auditing companies.

Specific advice was sought from these external advisers and also from a criminal barrister about whether there was sufficient evidence of criminality.

The advice was that there was insufficient evidence.

Despite the lack of evidence to support a criminal prosecution, there was evidence to progress disciplinary proceedings against staff and this resulted in a number of staff being dismissed or given final written warnings. A number of other staff have also since left RMS.

Even now if anyone has any actual evidence of criminality please let us know.

Finally, for now Chair, I would like to reassure Council  – as someone who has spent most of his professional career in enforcement and is used to attending court, working with police, instructing solicitors and helping put criminals into prison – that if there is any substantive evidence of criminality - we will prosecute.