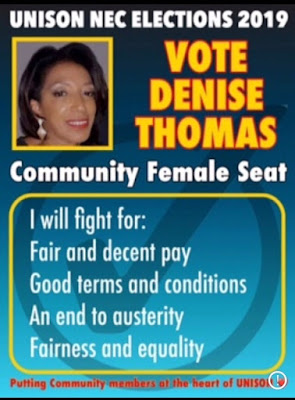 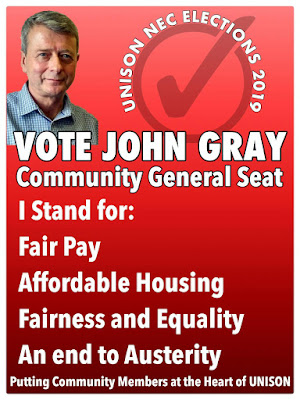 We did send a request on 7 January 2019 and we apologise for sending another request if your branch has already decided nominations but we believe that some branches did not receive our previous request. We understand from UNISON that your branch is entitled to nominate for Community NEC seats. Please see attached our joint nomination request (see also below). We hope your branch will consider nominating us. If you have any questions or queries please do not hesitate to contact us.

Your branch is entitled to nominate candidates to the two Community seats for this year’s National Executive Council elections. We request that your branch considers nominating John Gray for the General Seat and Denise Thomas for the Female seat.

Denise is currently the Major Charities representative on the Community Service Group Executive (SGE). She is also a grassroots UNISON activist holding positions as Branch Black Members Officer and Welfare officer for Ymlaen/Forward Cymru Wales. Ymlaen/Forward Branch has over 4500 Community members in over 400 organisations. Denise is the secretary of the UNISON Black Workers Self Organised Group and sits on her regional committee and women’s committee.

John is currently the Community NEC General seat representative and has been an activist in UNISON for many years and held a number of branch and regional positions including Treasurer, Health & Safety, Welfare, Labour Link, International officer and Assistant Secretary. He is employed by a large Housing Association and is the Branch Secretary of the Greater London Housing Associations Branch which has over 3000 Community members. Recently he led a successful campaign that resulted in UNISON winning a ballot by a massive majority in favour of trade union recognition.

Denise has a background working in the Voluntary and Community sector for the past 26yrs supporting Adults with learning disabilities. As a branch activist Denise has focused on organising, recruitment and representing members to get a fair pay deal within her organisation. As a regional activist and SGE member she has fought to promote equality and inclusive work places.

John has served the union as a NEC member on the Policy and Development Committee, Trustee on the UNISON staff pension fund, National Labour link and is a trustee of UNISON “there for you” (Welfare) fund Committee & Vice-Chair Industrial action committee.

We deserve a Pay Rise!

Care and support staff wages in particular are under threat as unscrupulous employers deliberately underbid to win contracts then try and do their upmost to destroy TUPE protections.

Many Housing management organisations are cash rich after years of rent rises yet still refuse to give their staff decent pay rises. In the voluntary sector employers are funding the National Living wage by attacking terms and conditions and increasing workloads. 2

Both of us as NEC and SGE members have been working and campaigning with branches and regions to oppose these measures. We believe that Community members must play our part in opposing Austerity and arguing for an alternative economic policy. We need to pull together and get rid of the current UK government

We also support the Community specific campaigns below such as:-

· No public money for “union busters”. Any employer that does not have a trade union recognition agreement should be barred from grants or contracts from local or national governments.

· Sector Wage Councils. Set up to decide the pay and conditions of all staff by collective bargaining including a living wage minimum for all Community workers and agency/sub-contractors.

· UNISON Ethical Care Charter. All employers must be called upon to support and sign up.

· Better governance and democracy. Increasingly many of our employer management boards are run by highly paid unelected and unrepresentative “elites”. There should be union employee representation on all Community Trust or management boards, especially remuneration committees (if applicable)

· Defend Pensions. Protect the Social Housing Pension fund and the Pension Trust from further cuts. Access to a decent defined benefit pension scheme for all.

We believe that we would both work together well as your Community NEC team. While Denise’s employer is a charity, John’s is a housing association, so we represent and complement both of the major sectors in the Community Service Group.

If you would like either of us to come and attend a branch meeting or hustings (under UNISON election rules) then please let us know and if we can, we will be delighted to come and speak.