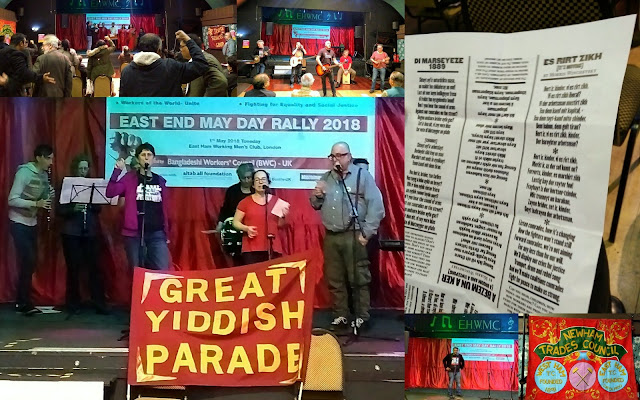 After we finished campaigning in our ward, my Labour & Co-operative colleague John Whitworth and I went to the "East End May Day Rally" in East Ham Working Mens Club. This was organised by the Bangladeshi Workers' Council and the Morning Star.

We were late but within minutes of walking into the hall we were singing along (badly) to the French Revolution anthem "La Marseillaise" in Yiddish!

Next there was a local (E17) "Steve White and the Protest Band" who also wanted audience participation and sang several great songs including one advising the EDL to stick their racist hatred up their a...

At the end there was also a musical performance of the "Internationale" in Bengali which we were also invited to join in and sign along.

In between there was a number of political speeches, including that of our very own Newham Cllr, Anamul Islam, who gave a nicely presented speech about how the Labour movement should unite and join the Labour Party.

I am not sure that democratic Parliamentary reformism is everyone's cup of tea but if it is, then they are more than welcome in the political branch of our movement.
Posted by John Gray at Wednesday, May 02, 2018