"50th anniversary of Ronan Point" & "Are tenants being listened to on safety?" (NO) 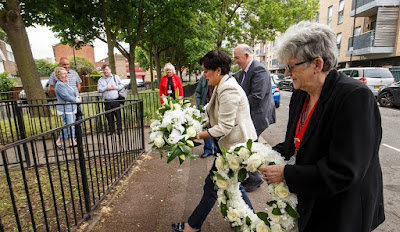 Ronan Point in Custom House was a 22 storey block near Butchers Road. The building partially collapsed following a gas explosion on the 18th floor in the early hours of May 16, 1968.

Four people died as a result of the blast, Thomas Murrell and his wife Pauline, Thomas McCluskey and Edith Bridgestock. Thirteen other people were injured and 80 families were made homeless.

Mayor Fiaz was invited to the event by campaigners Patricia Jolly and Paul Wade who want to see a permanent memorial those who lost their lives. She was joined by Cllr Pat Holland, who represents the Custom House ward, and Newham Council Chief Executive Kim Bromley-Derry.

Patricia, who lost a relative in the collapse, told a group of around 50 who gathered at St Mark’s Church Community Centre: “People need these memorials that come in the form of statues and plaques. The collapse of Ronan Point was an unexpected and awful tragedy, but it is a part of the history of Custom House and Newham, and should not be forgotten.”

The Mayor thanked the campaigners for their hard work and pledged the council would be working with relatives, friends, and all those who remembered Ronan Point, to create a respectful permanent memorial.

Mayor Fiaz said: “None of us will ever forget the feeling of horror and helplessness as we watched the events unfold on that dreadful night, and for those of you that lived in Custom House 50 years ago, it will have brought back the painful recollection of the tragedy at Ronan Point.

“Once again the country has been shocked into action and there is rightly, once again, a renewed focus on the safety of tower blocks, and all social housing. We in Newham have not, and will not forget the tragic lessons of Ronan Point and Grenfell and will make sure building safety lessons are not forgotten.” Hat tip Newham Council Website

and Inside Housing Magazine

On the 50th anniversary of the collapse of Ronan Point, tower block safety campaigner Frances Clarke questions whether Dame Judith Hackitt is really listening to tenants..

"A great deal is at stake.

The Grenfell Tower tenants said loudly that their block was a fire risk. No-one in power was willing to listen and 71 people died.

We had a completely different experience during the Ronan Point campaign. Ronan Point, which partially collapsed 50 years ago this week, was rebuilt and re-inhabited.

In 1982 the first tower blocks’ campaign national conference brought together a range of tenants, experts, community workers and activists.

During the conference, tenants of Ronan Point spoke to architect Sam Webb and told him of their concerns: they could smell food being cooked many floors below, they could clearly hear the conversations and TV programmes of neighbours far away.

Mr Webb responded by carrying out a survey of the flats during which he dropped a coin between the floor and wall and it disappeared, demonstrating that the flats were not sealed units, and fire and fumes could spread. Regulations were breached.

Pressure from tenants was enormous.

Newham Council voted to empty the block and they offered it to the Building Research Establishment (BRE) so that they could test it thoroughly.

The testing process was very transparent. A flat was set on fire to test one hour compartmentation – after 11 minutes engineers were seen to be scurrying out of the flat above as fumes and flames travelled upwards.

The fire had to be extinguished, the test had failed, the flat couldn’t contain a fire for one hour.

Structural investigations took place which revealed that the H2 joints could not be relied upon to hold the block up, they could not withstand a pressure of 2.5 psi. Instead of being packed with concrete, they contained newspaper and tin cans.

The Tower Blocks Campaign and Newham Council worked together to ensure that tenants were informed and involved throughout.

There were frequent meetings, with free transport and council-run creches. ‘Experts’ were required to talk in plain English and the council funded independent technical advice for tenants.

This experience showed us that effective partnerships can exist between engineers, architects, politicians, tenants, community workers and the media.

Are tenants being listened to now, in the aftermath of Grenfell? Sadly, the example of the remaining large panel system blocks, blocks like Ronan Point, is not positive.

Residents of the Ledbury Estate had raised concerns about gaps in their flats for years, their concerns heightened after the Grenfell fire. Resident Danielle Gregory’s questioning of the Council and of Arups, their consultants, about the existing ‘stay put’ policy was not welcomed.

Nonetheless she was proven right, resulting investigations showed that the flats could not contain a fire for one hour.

Tenants went on to force the examination of structural joints and again the joints could not withstand a pressure of 2.5psi – they should not have had gas or people in the flats.

Would this information have come to light without serious tenant pressure? It is the efforts of these tenants that brought large panel system construction to the attention of Dame Judith.

In these examples, a change in building regulation would not have solved the problem as these blocks were in breach of current regulations.

So the role tenants played was to alert authorities to a dangerous situation. Why do tenants, such as these, have to work so hard to be listened to?

Why can’t landlords work in partnerships with tenants, as with the Ronan Campaign? Will Dame Judith’s Review properly address tenants’ voice?

Will she ensure that a legally enforceable pathway is created for tenants to report their safety issues when their landlords do not respond appropriately to their concerns?

Are you listening Dame Judith, have you heard?"

Hat tip Inside Housing
Posted by John Gray at Thursday, May 17, 2018