May Day Workplace Disclosure Initiative - "Improving the quality of jobs". 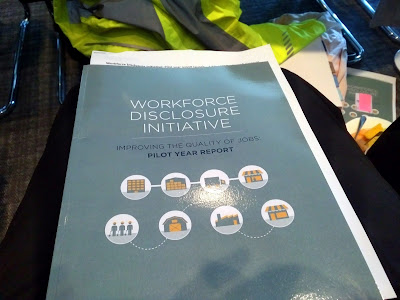 I went to fascinating (and packed)"May Day" meeting today as a Pension trustee asset owner on the launch of a new report by the "Workplace Disclosure Initiative" on "Improving the quality of jobs".

One of its recommendations was that there should be as much reporting by companies on how they treat their workforce (including their supply chain) as on climate change.

I will blog further once the local elections madness are over but I was impressed with the story told by its Executive Chair, Richard Dickinson in his opening remarks.

My question to a panel debate was this:-

"As a trade union activist I had the choice today of going to this event or the traditional May Day march & rally in Trafalgar Square. Despite the beautiful weather, I am pleased with what I am hearing here. However, while the UK is clearly not as bad as many developing countries in the way they treat workers, we must get our own house in order as well. I represent workers in the UK who live in poverty, have insecure employment, awful housing and feel hopeless and betrayed. Unless we clean our own house, concern for those overseas may be seen as crocodile tears.

My question is does the panel agree that in the long term, companies who treat all their workers well will tend to produce superior investment returns?

I was pleased that the panel was broadly supportive. Janet Williamson from the TUC said there is a  high road to profitability and a low road. In the short term you can make profits from treating your workers badly  The "high road" is better. You do need "vision". Sustainable profitability is via the high road. Decent work should be "business as usual".
Posted by John Gray at Tuesday, May 01, 2018