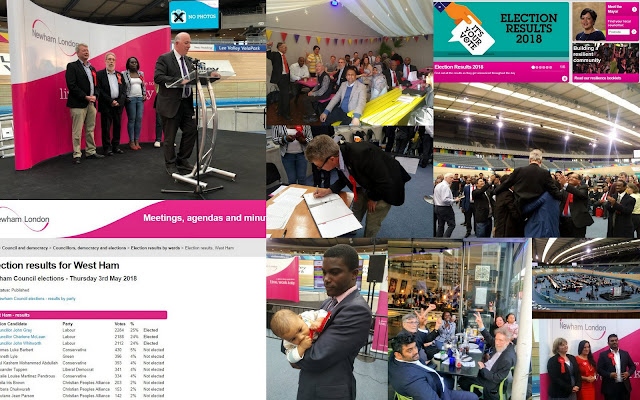 I was delighted to be re-elected yesterday as a Labour (and also now Co-operative) Councillor in London Borough of Newham for a 3rd term with Cllr John Whitworth & Cllr Charlene McLean.

Seriously though, the Labour vote in our ward is humbling, we got about 5x the support of the nearest Conservative opponent. All 60 seats in Newham are Labour with similar massive majorities. Whilst I recognise that the "first past the post" system is outdated and needs reform, this result demonstrates the historic and ongoing support of the people of Newham for Labour. We must not take this for granted and must deliver despite the savage Tory cuts.

I was also really pleased that Rokhsana Fiaz was elected Labour Executive Mayor with a staggering 73% of the vote (note under a transferable vote system). She has increased the Labour Mayoral vote by 12% since 2014. A fantastic mandate for change in Newham. Rokhsana is the first directly elected black female mayor in the UK (and possibly Europe?) and has I think the highest percentage vote of any Executive Mayor.

When I recover I will blog further. Many thanks to our Agent, Carl Morris and all the Labour Party activists who worked their socks off for us (including my good lady wife, Gillian)
Posted by John Gray at Saturday, May 05, 2018