"Antisemitism on the left" 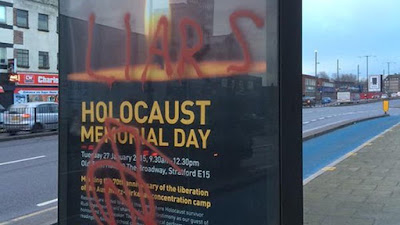 This welcome post is by my fellow West Ham Labour Vice Chair, Josephine Grail on her personal blog.

"I have been troubled recently by a lot of the responses I have seen in my social media timelines to the antisemitism issues in the Labour party.

First of all: antisemitism exists on the left and in the Labour party; if you believe it doesn’t you’re not looking hard enough, or you’re choosing not to see it. (I’m reminded of the several cis men who, during our CLP’s debate on a motion opposing transphobia, got up to say that they had never witnessed any transphobia in the party. Well…)

Secondly: the mural that was the subject of the recent scandal undoubtedly contained clearly antisemitic imagery. I am surprised that anyone would choose to deny or question this.

Thirdly: the original response by the leaders’ office to the mural was inadequate, although I think Corbyn’s second response was reasonable. (“I sincerely regret that I did not look more closely at the image I was commenting on, the contents of which are deeply disturbing and antisemitic. The defence of free speech cannot be used as a justification for the promotion of antisemitism in any form. That is a view I’ve always held.”) However, it’s clear that in general Corbyn’s office and the Labour party more widely have failed to respond adequately to allegations of antisemitism and that there needs to be a great deal of political education within the Labour party about how to address and challenge antisemitic attitudes.

Left antisemitism has long been an intransigent issue and one which is difficult to tackle at least in part because of the dual bad faith which has existed in parts of the discourse about Israel and Palestine: that is, on one side antisemites who use the cause of Palestinian rights as a cover for their prejudice against Jewish people; and on the other side, those who allege antisemitism in bad faith in order to discredit legitimate criticism of Israel.

This is not to justify the existence of left antisemitism, but one reason why it has historically been difficult to address – although actually it’s straightforward to criticise Israel without being antisemitic: the Jewdas guide is very helpful. Those of my age or older who were involved in Palestinian rights politics at the beginning of the 2000s will remember this ‘debate’ dragging on – and may also remember that antisemitism was a recurrent issue which (in my opinion) much pro-Palestinian politics never adequately addressed.

However, it’s noticeable that the recent antisemitism issues have not been about criticism of Israel or Palestinian rights, but straightforward hatred of Jews: Holocaust denial, images of hook-nosed financiers, the far-right myth that Jewish people were responsible for the slave trade, conspiracy theories about ‘powerful special interest groups’. All of this is appalling, and there is no debate to be had about it; it’s wrong. It shouldn’t happen. And if Jewish people are criticising it, others should listen.

Yes, I understand the impulse to dismiss this as yet another way of attacking Jeremy Corbyn; and I share Rhea Wolfson’s opinion of the Labour MPs who are taking up this cause opportunistically. There have been so many bad faith scandals that it is tempting to dismiss this as a further one. I don’t agree that it is.

It’s fair to note that some of the behaviour uncovered by the press predates Corbyn being elected and that it’s unreasonable to view this as purely a Corbyn problem; antisemitism existed in the Labour party before Corbyn became leader. One of the reasons why this has come to head now is because a) there are many more Labour party members and b) the media are looking for antisemitism in a way that they were not before. Neither of those points lessens the need actively to address left antisemitism. It is possible for something both to exist as a genuine problem and for it to be dishonestly instrumentalised by those trying to use it as an attack line.

Finally: I have been trying to put together some of my thoughts on this issue for a while but haven’t had the time to write something coherent until now. I wish I had written something earlier as I think the criticism of those who “remain silent” from a Jewish comrade who has just resigned from the local Momentum group is relevant and important.

Some things I found helpful to read on the topic:


(photo of Holocaust Memorial Day poster defaced in Newham in 2015 added by grayee))
Posted by John Gray at Thursday, April 05, 2018