Dancing on the graves of decent pensions: Double Bubble for the Few, Misery for the Many 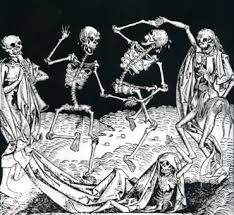 There was a really rubbish and ignorant article here in the Evening Standard recently about a so called "black hole" in London Local Government Pension schemes.

This story is completely nuts. Most Local Government Pension Schemes are in better shape now than there have been for decades. Many are close to being fully funded. I note that the Standard did not bother to check its facts or get an alternative view.

The lies and untruths told by some of the financial services industry about defined benefit pensions is simply shocking. The totally unnecessary destruction of defined benefit pensions in the private sector will go down as one of the greatest financial scandals there has ever been. Countless millions of Brits and their families have been deprived of any chance of a decent pension by this scandal and will have to retire and die in poverty or work until they drop.  While their dependents and kids are left destitute if they die or become ill.

While Government, regulators and employers deserve their share of the blame, many financial advisers have made pots of money by closing schemes and then opening expensive new inferior Defined contributions schemes. Double bubble for few: misery for the many.

Check out the statement below from Cllr Forhad Hussain about the facts.


"The recent Evening Standard article https://www.standard.co.uk/news/london/council-pensions-black-hole-grows-to-17-billion-soaring-20-in-a-year-a3791756.html made a misleading and inaccurate link between an international accounting standard number and the pension contributions made (and by inference the level of services provided) by Councils.

Council pension contributions are determined by a valuation process which takes place every three years and certified by a professional actuary in accordance with Government regulation. The last of these took place in 2016 and in fact showed a £10bn reduction in the deficit across England and Wales when compared to 2013.

With regard to the Newham Fund having the highest ‘deficit’ in the 2016 valuation, it actually showed an improvement in funding levels to 85%, a £97m reduction in the deficit to £201m from the last valuation in 2013. Since then funding levels at Newham have continued to improve and are currently estimated to be in the region of 94%. The reduction in pension deficit enabled the Council to make £4m savings per year in its budget strategy enabling resources to be reallocated to help maintain vital services. The Government Actuary has also checked the actuary’s valuation and concluded that that the Council is “paying enough” into the pension fund.

The accounting number quoted in the article is NOT used to determine council contribution rates (nor anything else with regard to the council pension scheme) and therefore has no impact whatsoever on the resources available to services.

Please also be aware that the Local Government Association also support the above and our position on this matter.
Interested readers can find more information on the 2016 valuation of council pension funds in England and Wales on the authoritative Scheme Advisory Board website http://lgpsboard.org/index.php/2016-valuations-summary.

If you have any queries on the above please do not hesitate to contact me.