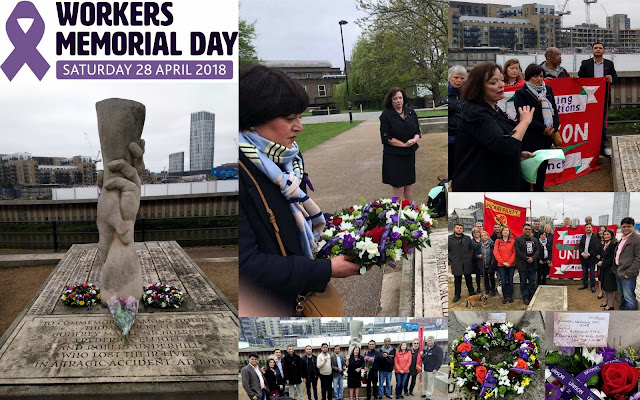 Today is International Workers Memorial Day which remembers workers who have been killed at work or died of industrial injuries or diseases. It is also a health & safety campaigning day to protect the living.

This morning Labour Party members & trade union activists in Newham paid homage to local heroes who sacrificed their lives to try and save their fellow workers. At this site (now called Three Mills Green Park) in 1901, managers at a nearby brewery ordered a disused ventilation mine shaft to be reopened.

A worker was sent down to the shaft to inspect it. He was quickly overwhelmed by noxious fumes at the bottom of the shaft. In turn 3 other workers bravely also went down and tried to rescue their comrades but all were killed in doing so.

At the inquest management were rightly condemned for failing to follow even the basic health and safety measures of the time. A lighted candle should have been lowered down first to check for fumes. If they had used trained and specialist staff this tragedy would never have happened.

This year West Ham MP Lyn Brown and Newham Councillor, Rokhsana Fiaz (who is also the Newham Labour Mayoral Candidate) spoke at this event and laid separate wreaths on behalf of UNISON HAB and West Ham Labour at the striking and beautiful "Clasping Hands" memorial in the park. It was a moving occasion. I will post the speech by Lyn Brown later.

We are planning to return to this memorial in the near future since it needs a bit of a clean (after getting the full agreement with the Lea Valley Park). Many thanks to Tim, the Park Ranger for attending and his helpfulness in arranging this event.
Posted by John Gray at Saturday, April 28, 2018