Sports Direct: Treating workers like dirt is bad for business (and investors) 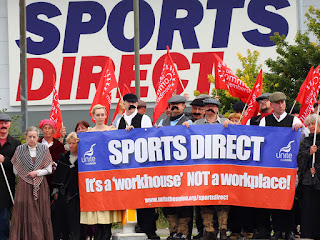 I was pleased that UK Council leaders are supporting the resolution at the Sports Direct AGM next week for a review of its HR practices.
UNISON staff pension fund have backed this campaign via the TUC organised Trade Union Shareholders Organisation.
Both LGPS pension funds I am associated with have instructed their fund managers to vote in favour of motion 19.
If a company treats its workers like dirt there is a long term risk to investors. If you have workers collapsing at work since they are too scared to report sick if they are ill and female employees sexually exploited to keep their jobs then there is clearly a dysfunctional employer causing massive legal,  reputational (and moral) risks to any pension or insurance fund that seeks to invest in it.
If they do all this to their workforce then what else is going on? Fiddling taxes? Excessive payments to Executives? Faulty accounts? Corrupting public officials? Trashing the environment?
LAPFF press release. "Leading shareholder group, the Local Authority Pension Fund Forum (LAPFF), has backed a shareholder resolution at Sports Direct’s Annual General Meeting. The resolution calls for an independent review of Sports Direct International plc’s human capital management strategy and requests a report on the findings of this review to be released to shareholders within six months of the AGM.

The UNITE union has filed the resolution after extended criticism of Sports Direct’s labour
practices. This criticism includes reports of severe health and safety violations and sexual
abuse at the Company’s Shirebrook facility in Derbyshire, as well as use of so-called ‘zero
hour contracts.’ The labour practice concerns have been coupled with a massive drop in share price over the last year and Sports Direct’s departure from the FTSE 100. Some commentators have alleged that the two issues are related.

According to LAPFF Chairman, Cllr Kieran Quinn, “LAPFF’s view is that responsible business practices by companies lead to sustainable returns for investors over the long-term. We are worried that this view is not shared by Sports Direct.”

In support of the resolution, LAPFF has produced a proxy advisory briefing which has been
distributed to its Member Funds. This briefing expresses concern that although Executive
Chairman and controlling shareholder, Mike Ashley, has committed to conducting a workplace review himself, this review would not be independent. LAPFF is further concerned that Sports Direct’s promise to have its lawyers, RPC, issue a summary of Mr Ashley’s report would just rubber stamp the Company’s version of affairs.

A Trade Union Share Owners statement has said: “The [C]ompany’s proposed review outlined in its explanatory note on its opposition to resolution 19 is to be carried out by an organisation that is not independent of Sports Direct and lacks relevant expertise in employment and industrial relations practice.”

Cllr Quinn stated, “LAPFF’s hope is that an independent human capital strategy review will
rectify any workplace practices deemed inappropriate and will help Sports Direct to move
forward from the reputational and financial damage it has suffered.”

The Sports Direct AGM takes place at its controversial Shirebrook facility on 7 September.
Posted by John Gray at Tuesday, August 30, 2016