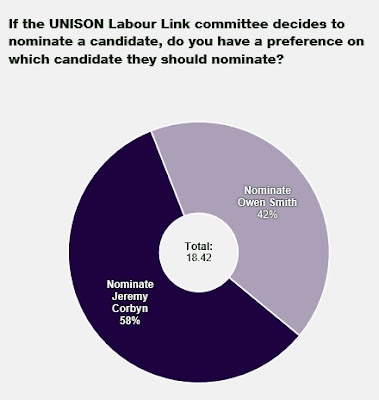 This lunchtime I attended a meeting of the UNISON Labour Link (also known as the "APF") National Committee at our headquarters in Euston.

The meeting was to decide whether or not to make a supportive nomination for the next leader of the Labour party and if so, would it be for Jeremy Corbyn or Owen Smith.

I was there as one of the UNISON National Executive Committee representatives.

UNISON had carried out a consultation of 200,000 Labour Link fund members we had email addresses (out of a total of 400,000) and a clear majority had wanted the union to make a nomination and 58% wanted that nomination to go for Jeremy Corbyn.

The meeting took reports from National officers, the General Secretary, our Labour Party NEC members and UNISON regional delegates.  We agreed to support Jeremy (again) as the Leader of the Labour Party.

I think that this decision accurately reflects the views of UNISON Labour Link members (and probably the 900,000 non Labour Party affiliate members, who mostly vote Labour).

I was really pleased that the UNISON press statement (see below) announcing the decision made it so clear that the Party must stop the current nasty and destructive infighting and must unite to fight the real common enemy - which is the Tories!

"The committee decision follows discussions at regional and national level, and a consultation of UNISON members who are affiliated to the Labour party. The consultation was carried out online.
UNISON general secretary Dave Prentis said:

“Jeremy Corbyn retains the backing of a majority of UNISON’s Labour supporting members. That’s why the committee supported his nomination again.

“However, a significant minority backed Owen Smith. Their views will always be respected in our union- that’s our proud tradition.

“It’s healthy for people to hold alternative views on the future direction of the party. What’s toxic though is for abuse, threats and aggressive language to be considered acceptable- or the norm. Labour is in danger of becoming the new ‘nasty party’ if this behaviour continues unchecked. There’s no place in the party for witch hunts against MPs, councillors and party staff.

“The decent hard-working people we represent don’t want a party riven by infighting. They want a united opposition that stands up for public services which are facing intolerable pressures.”

Around 30,000 UNISON members are registered as Affiliated Supporters of the Labour Party and eligible to vote based on their personal choices in the election".