"East Ham War Pensions Committee: Your Fight Is Our Fight" 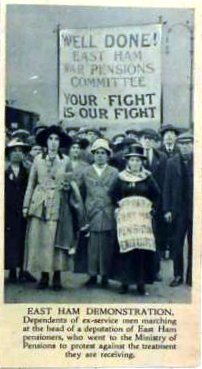 Historic photo of  dependants of World War One ex-service men protesting against cuts to War pensions in 1919. The authorities claimed that the local East Ham War Pensions committee did not follow the "rules" and gave out too generous benefits.

Check out "British Widows of the First World War - The Forgotten Legion" about this story and the dreadful treatment of many widows whose husbands had been killed for post war "immoral misconduct".