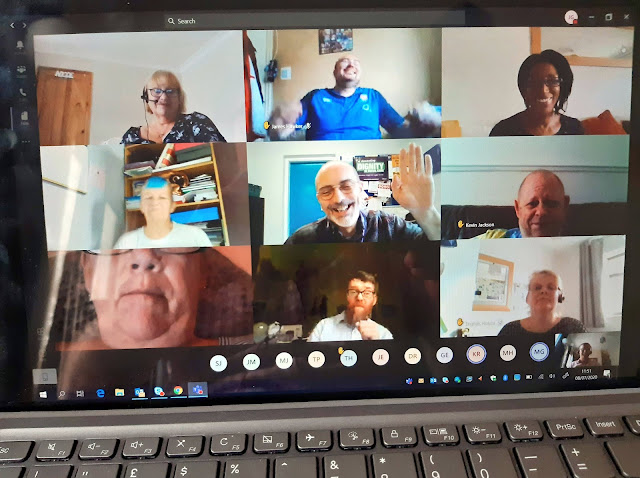 (Love this pic. The 1.3 million members of UNISON are split into "Service Groups" according to their occupation and employer. Community comprises of members employed by the Voluntary Sector (Charities and Housing Associations). While we have our moments, it is known as the "Friendly Service Group". Microsoft teams only allowed 9 videos out of I think 23 participants in the meeting on my laptop.

They were not laughing at my report - honest!)

"May I start by noting that this is the first full meeting of the SGE since the General election disaster and the woeful performance by Boris Johnson and his Government during the Covid-19 pandemic reminds us what a catastrophe that election result was to all workers.

I would like to thank the activists and staff in Community for their superb dedication, care and support to members. In this most difficult of times they have made the union proud of them and the work which they have done.

No-one expected when they became an activist or a staff member that they would have to part of this national emergency supporting sometimes very frightened members while fighting for adequate PPE and risk assessments.

Hopefully, you will have seen the letter of thanks signed by myself and Denise Thomas which was sent to all Community members (on email)

So much has happened it is hard to remember. Much of the business was agreeing motions for NDC; Finance report. The General Secretary in his report noted that Shantha David, a UNISON legal National officer, had been named by “Lawyer Magazine” as one of the top 100 lawyers in the Country. There was a full discussion on the Labour Link Nomination process for Leaders – why Keir and Angela. The launch of the UNISON Housing manifesto and mentioned during the industrial action update the dispute between our members and Addaction over Agenda for Change terms.

A wet and windy Cardiff but I think a warm and successful conference. A few weeks later began lock down. Hopefully, we will be able to hold next year’s conference in person.

(Note Community SGE 25 March 2020 was cancelled due to Covid-19 lock down. NEC meeting on 1 April 2020 cancelled since it was a meeting to discuss National Delegate Conference only business - which has of course had also been cancelled).

Dominated by immediate response to Covid-19 and a future recovery response.

Was held virtually via GoTo and actually worked in my view very well. I think there was a better attendance than during physical meetings in the UNISON Centre. The meeting started with a moving tribute and one minute’s silence as the names of the 66 UNISON members known to have died from the pandemic were read out. Covid-19 and “Black Lives Matters” naturally dominated the meeting.

General Secretary made it clear that UNISON will hold the government to account https://www.unison.org.uk/news/article/2020/06/nec-told-will-hold-government-account-covid-19/

A number of meetings and updates with trustees and advisers. Massive reports to read. By far my busiest NEC responsibility.

Labour Link also had a special meeting with Angela Rayner.

Many thanks to our Regional Community leads and the National officer team for all their support (while working from their kitchens and living rooms) especially Andrew who was thrown into the deep end as our new national officer.

I have been involved in constructive talks with National and regional officers with the National Housing Federation about possible joint working over Covid-19 and aftermath.

(Please ring #### or email John.Gray2012@icloud.com if any questions or comments. If you want Denise (my fellow NEC Community rep) or I to present virtually to your branch or regional meetings then just let us know)
Posted by John Gray at Wednesday, July 08, 2020