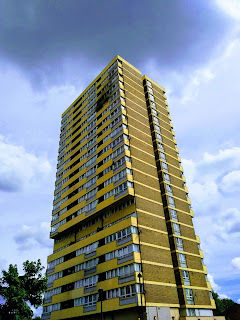 On Friday I went on a "walkabout" with residents and Newham Housing officers from the top to the bottom of Brassett Point in my ward.

It is always encouraging when you see residents who actively care about their homes and their environment. They have collected a petition, which 90 out of the 120 flats have signed, calling for improvements in communal repairs and stopping anti-social behaviour.

A number of actions were agreed and there will be follow up inspection later in the year.

The sister block nearby, David Lee Point (see picture left who also sent a resident representative) will be next.

By coincidence it was good to meet up with former colleagues from Tower Hamlets Council. I used to work with Agnes, now a local resident, (2nd from right above) when she was a Homeless Officer and Bob, a local caretaker (not in picture) we met on the walkabout who used to work with me on the Ranwell East (Roman Road) estate.

The longstanding Leather Gardens TRA rep, Ted Nolan (1st on left), was there as ever, to keep things moving along and all of us in order.

The residents will be handing in their petition at the next full Council meeting and are planning to send in a delegation to speak at the meeting. They are also going to set up a Facebook page for the block.
Posted by John Gray at Sunday, August 19, 2018