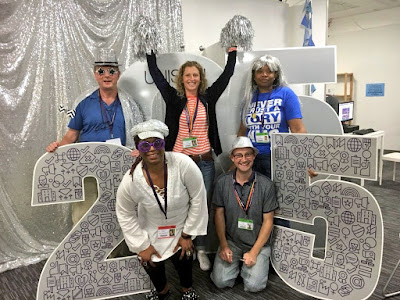 By branch activist, Naomi Adams, in picture of branch delegation celebrating the 25th anniversary of UNISON at conference. (Hands in air).

"Ahead of attending the conference I went on the ‘Going to Conference’ one day training course and I highly recommend this for first time delegates. At this training they went through how to vote, explained the Standing Orders Committee Report, the Conference App, useful meetings to attend, how to speak at conference and many other things. They also give you a handy booklet which has lots of useful first time delegate information in it. It also meant that when I got to conference I saw some other familiar faces apart from my own delegation which was nice.

For this conference I was a sharer which was nice because being there for the whole 4 days is pretty tiring and demanding! Being a sharer means that you have two credential badges which you share between the two of you. The red badge gives you access to the visitors’ gallery and the green badge gives you access to the delegate hall. You must meet with your fellow sharer and swap badges each time you take turns on the delegate floor.

Here some details of some of the debates I sat in on.

Conference celebrated the success of the NHS pay increase. But concerns were raised regarding Northern Ireland and the impact Brexit will have. Membership has increased by over 2000 and we are now officially the largest union in the UK!

Unison forecasted a drop in income last year and predict the same for this year. This equates to a 10 million pound drop and this increases further when inflation is taken into account. The Trade Union Act has brought extra running costs. The Fighting Fund is now 32 million pounds and 505 fighting fund organisers have been employed since 2017. I can personally vouch for the success of this initiative as Optivo has had excellent support from our fighting fund officer.

There were many excellent and inspiring speeches from women on this subject which is close to my heart. I found these speeches very inspiring and thought this year’s Conference Chair Margaret McKee, a catering assistant from Belfast was a truly inspiring woman who had carried out her tenure despite great personally tragedy due to the loss of her son who was shockingly murdered this year. The debates centred on investigating the barriers which prevent low paid women from engaging and taking senior roles in the union. The point was made that only two regions have Regional Women Officers and conference agreed that more of these posts would go a long way to solving recruitment problems in this area. This motion was carried and NEC will report back to conference 2019 with findings and recommendations.

This was a very energetic and fiery debate on the 25 year strategic review. The NEC proposed this review to assess whether sufficient resources are being placed where they are needed rather than historically allocated. The current funding formula is based on single employer branches however branches like ours dealing with hundreds of private employers are now more the norm. The NEC proposes a strategic centre that supports strong organising regions and active branches instead of fragmented independent branches. Another important suggestion made was does the current overly bureaucratic model of self-organisation deliver the needs of the union. Could the system be streamlined in order to progress the equalities agenda more effectively? A lot of the bigger branches spoke against this motion and accused the NEC of trying to centralise control. The motion went to a card vote but did not pass. I think this is a missed opportunity and hope this gets resolved as I feel this review is really important.

This was a very emotional debate in which the branch secretary for the K&C TMO got up to speak about the disgusting way this tragedy was dealt with and how front line staff were left to fend for themselves by the very people responsible for this awful event. As a Housing Officer who has always fought for fire safety improvement works I could really relate to this debate. Deregulation of fire safety controls, inspection and planning laws created this avoidable disaster. Conference welcomed the Labour governments progressive polices on housing such as committing to building 100,000 new council homes, introducing new legal minimum standards and control on rent rises. Also importantly people spoke on reinstating and enforcing independent fire safety and building regulations. It causes me great pain that 70 people had to die in order for this overall of the system to be carried out. I really hope these families are not left fighting for justice for 30 years in the same way as the Hillsborough families. With Unisons support let’s hope this does not happen.

Overall I had a really inspiring and motivating experience at conference and I encourage new Stewards to go and see the bigger picture of Unison. It is very refreshing to be in an environment which continually strives for equality and opportunity for all and is such a new experience for me".