"Newham at forefront of Housing Crisis" 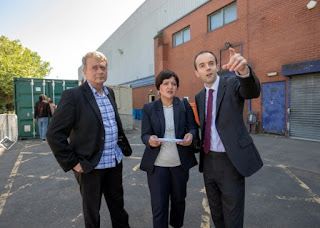 Hat tip Newham Recorder for a pretty full on report on the housing crisis in our borough.

The new mayor of Newham has slammed the loss of nearly 10,000 council homes under Right to Buy since the 1980s – saying the policy has exacerbated the bitter housing crisis in the borough.

Labour mayor Rokhsana Fiaz has called for an end to the divisive scheme blaming it for swelling the number of private landlords in Newham.

“Right to Buy is supporting the growth of the private rented sector rather than its original intention of supporting social tenants to purchase their own home,” she said.

Some 47 per cent of social homes in Newham bought through Right to Buy are now in the private rented sector, according to town hall figures.

Meanwhile 4,892 households are unable to find an affordable home and have sought council help for emergency housing.

“The massive discounts of up to £108,000 [to buy council houses] in London, together with rules around the use of Right to Buy receipts has meant it is impossible to replace these desperately needed social homes and keep pace with growing demand for them,” said Cllr Fiaz.

“Soaring rents, a skewed housing market and stagnant wages are fuelling the housing crisis we are seeing in Newham and across London.”

She set out her vision for the future of housing the borough and pledged to:

- Begin building 100 of these in her first year in office

But these measures are unlikely to make a significant dent in the 27,228 households currently on the council’s housing register.

It comes as the Recorder’s Hidden Homeless investigation has revealed Newham has the highest level of homelessness in the capital.

The staggering level of housing need has resulted in 3,292 households being moved out of the borough the five years to 2017, and 14 per cent out of London altogether to places as far away as Birmingham and Thurrock.

There are now more homeless Newham households living in temporary flats, B&Bs and hostels than anywhere else in London.

“In Newham, we have lost 1,178 social rented council homes over the last eight years and it is one of the reasons why the number of genuinely affordable homes has declined dramatically,” said the mayor. “Until we can change that, we have little choice but to house our residents in expensive temporary accommodation, which is not ideal at all.”

Private landlords are also taking advantage of this housing demand, “with many hiking up rents to a level our residents can’t afford”, said the mayor.

Housing reform was at the forefront of the mayor’s successful bid to win power at the local elections in May.

We asked for an interview with Cllr Fiaz to discuss housing policy. She was unable to meet the Recorder but provided answers to detailed questions.

We asked why six years after the 2012 Olympics and the promise of significant numbers of new homes, Newham was at the forefront of the housing crisis.

“We’ve been challenging the London Legacy Development Corporation on the limited delivery of genuinely affordable housing as they own the Queen Elizabeth Olympic Park and are responsible for all development delivered as part of the legacy promised before the Olympics came to Newham – including housing,” she said. “I’m determined that under my administration we keep on pushing partners to deliver genuinely affordable housing for local residents.”

She also said in an ideal world the tens of millions spent annually paying for temporary housing would instead be invested in new affordable homes.

“I’d love for us to build loads of new homes,” she said. “This is my ideal world, and I am really frustrated that we are constrained by finances and the reluctance of the government who are stopping us and other councils borrowing to build the homes our resident’s desperately need.”

She said a campaign on housing would be launched this autumn, but provided no more details on the specifics.

In her first week in office she also met Mayor of London Sadiq Khan, deputy mayor of London for housing James Murray, and shadow secretary of state for housing MP John Healey to look at working together to solve the housing crisis.

Asked what her vision for council housing in Newham is, the new mayor said: “I am committed to reversing the chronic failure to build affordable social homes in the capital.”

But, echoing other council leaders across Lodnon, she says the government needs to lift restrictions on local authorities borrowing to build homes.

“I am working closely with the Mayor of London and other partners to ensure we maximise all opportunities and funding available to build more homes in the borough,” she said.