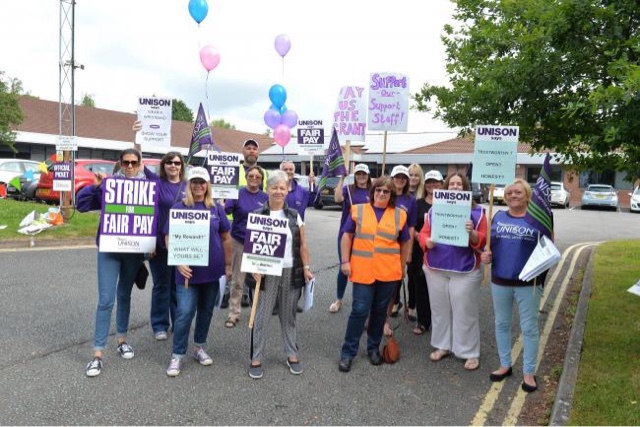 Good luck to Unison members about to start a further bout of strike action tomorrow. I will be sending a message of support both as a Unison NEC for such community members and behalf of our branch executive.  See letter below explaining the dispute in local newspaper.

"THERE’S a critical dispute happening in Cwmbran. Support workers at Bron Afon housing association have been forced to take strike action after their employer stripped £3,000 from their salaries.
They are not highly-paid and no-one goes into support work to become rich but Bron Afon behaviour has created horrible stress and reduced many staff to tears. In the struggle to make ends meet, some are looking at second jobs or dropping out of the pension scheme.
Support workers are dedicated to helping improve the quality of life for vulnerable people and give them more independence. Their vital interventions allow service users to keep their home.


Yet because of the slashing of salaries, some employees are themselves at risk of having to leave their homes because they can’t pay the bills.
Staff are fighting back, taking three days strike action and they were pleased to be joined on the picket line this week by Nick Thomas-Symonds MP and Lynne Neagle AM. Bron Afon can afford to restore the £3,000 to each individual.
There is a moral duty to end the suffering of their staff now".
Cheryl Morgan
UNISON Torfaen County branch secretary
Civic Centre
Pontypool

UPDATE: Subject: Re: Message of support

Thank you so much John, we don't need financial support at the moment but will let you know if we get to that point
Our striking members are very strong and will really appreciate your expression solidarity