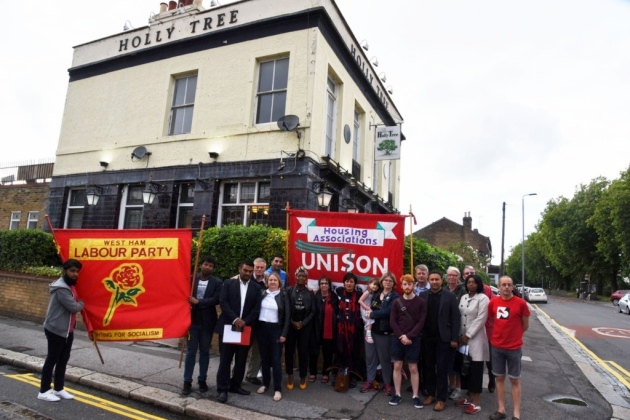 
Dozens gathered to pay their respects to Forest Gate’s war dead on the anniversary of the night a bomb hit a bus during the Second World War. 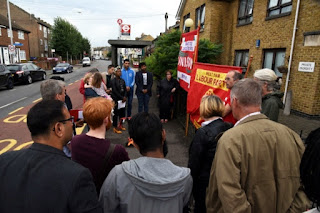 The event, organised by Forest Gate North Labour Party, was held at the site of the 1944 blast outside The Hollytree Pub in Dames Road.

It is thought around 20 people died in the explosion, although no reliable record exists because wartime press censorship stopped much detail being published in order to limit the information available to the enemy about attacks.
Cllr Seyi Akiwowo, one of the organisers of Thursday’s event, said: “The event was fantastic. It was put together at short notice and there was a good turnout. I’m glad we were able to pay our respects.”
In his speech at the vigil, Cllr Anam Islam said: “Now, just as then, the price we pay for liberty is eternal vigilance against racism and prejudice.”
West Ham MP Lyn Brown, who was unable to attend the event, told of its importance.
She said: “It is right and important that we commemorate those who perished or lost loved ones in the fight against fascism, and just as important that we remember the anti-fascist and anti-racist heritage of the East End with pride.
“Levels of racist, Islamophobic, and anti-Semitic hate crime have all risen over the past year, and it is important we draw on this past to bring us together and renew the fight against far-right ideology and its terrible effects. That aim will be easier to achieve if we have a more accurate narrative of what actually happened.”
Eyewitness Cyril Demarne is quoted in The Heroic Story of the Second World War Bomb Disposal Teams by James Owen as saying: “A trolley bus, crammed with home going workers, had caught the full blast and the whole area was a sickening sight.
“Dismembered bodies littered the roadway, others were splattered over the brickwork of the houses across the way and the wreckage of the trolley bus was simply too ghastly to describe.
“The lower deck seated passengers were all dead. Although many of the victims had been decapitated, they were still sitting down, as if waiting to have their fares collected.”
(the V1 flying Bomb landed just outside Newham but much of the bomb damage and deaths were inside modern Forest Gate. A 80 year old local resident who remembered being told about the attack pointed out to us the exact impact. The death toil was at least 38 and probably much more)
Posted by John Gray at Thursday, August 03, 2017