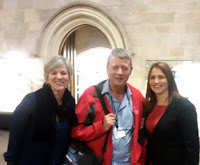 Yesterday evening I went to the Parliamentary debate at the Grand Committee Room in Westminster Hall, which took place following the 105,000 signatures in the petition against Tory plans to direct and control the 5 Million member, £200 billion UK Local Government Pensions Scheme.

I sat with the ever quiet and demur UNISON national officer for Capital Stewardship, Colin Meech.

A number of opposition MPs from different political parties had decided to support this petition at the debate.

I will post later in more detail on this event once I have seen and considered the full Hansard report on the proceedings but it is pretty clear to me that the Tory plans to have powers to direct LGPS funds to invest in their pet political infrastructure projects and stop funds from investing overseas unless they sign up to Tory Government foreign policies, is just an absolute disgrace.

UNISON is convinced that such demands are illegal since pension funds have to decide to invest in accordance to the best interests of members of their fund and not the political whim of Government ministers.

It was also clear to me this evening that in response to a direct question by Melanie Onn MP, that the new Local Government Pension Minister, Marcus Jones, while trying to defend this robbery, simply did not understand that there is no Crown Promise or Pension Protection Fund for the LGPS. Under present plans if the Government forces the LGPS to invest or remain in disastrous investment schemes then all bets are off about the sustainability of the Scheme and the safety of our pensions.

I had to agree with the remarks by Jack Dromey MP, that these plans for the local government pension scheme are not only illegal but more "Leninism than Localism". What on earth is a Tory Government which claims to be against big government and in favour of localism and a small state acting as Marxists and telling local pension schemes what they should be investing in?

Okay, I get it that they should be telling them not to invest in very risky derivatives (LOBOS) or a race horse at the 3.30 at Newmarket. But telling them "what" to invest in for political reasons is very different.

Don't they realise that they are giving a precedent for any future government to direct pension investments as they see fit?

This bonkers' policy will mean less investment, not more, by the LGPS into much needed UK infrastructure investment, since there will be a justifiable suspicion by pension committees and boards that money is being allocated in order to avoid possible government intervention rather than in the best interests of members. They will be suspicious of all such proposals and should be minded to challenge and oppose them until this law is changed. Talk about unintended consequences!

The fight is not over and if the Government thinks this will go away then they are being completely delusional.

Picture from after meeting in Westminster Hall of Labour MPs, Melanie Onn and Lilian Greenwood, who are UNISON members and turned up tonight to support our campaign. Many thanks to all the other MPs who turned up as well to save their constituents' pensions and make sure that their money is not being used by this or future governments for their own political agendas.