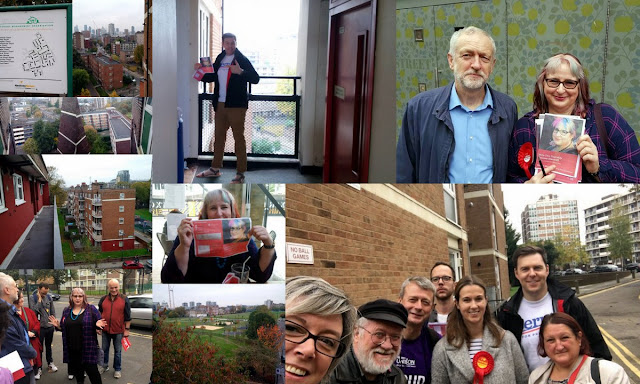 Yesterday morning I missed the very beginning of the canvass session in support of Yvonne Maxwell, who is standing as the Labour candidate for Hackney Council in a by election in Hoxton West.

Labour Leader Jeremy Corbyn MP turned up (by bike) to go out and canvass with Yvonne. By all accounts he and Yvonne had a fantastic response from residents and passer-bys coming up to him to offer their support, cars' tooting and giving them the thumbs up.

Yvonne is the daughter of a respected former Newham Councillor, Doris Maxwell.  There was 3 of us from West Ham Labour Party helping out.

I went out with a canvass team of local Councillors and activists led by Polly Billington who I had met before when she was the Parliamentary candidate for Thurrock. Also in the team was Hackney cabinet member for Jon Burke who was a former UNISON delegate to our Regional Council.

Polling Day
Thursday 3  from  8am to10pm