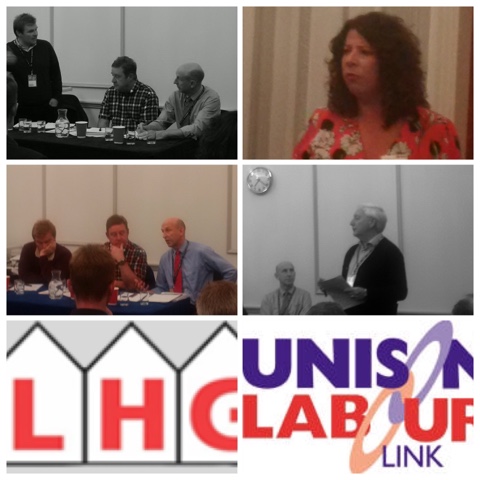 After the "Unions together" fringe on Sunday I cycled (using the Liverpool Council rented City Bikes) from the conference centre to my 2nd housing fringe that evening at the historic Cunard Buildng in Pier Head.

The Labour Housing Group is a socialist society affiliated to the Party. The meeting was sponsored by UNISON Labour Link and the chair was Paul Eastwood.  The theme of the fringe was "Local Labour Projects Challenging Tory Inaction on Housing".

I missed the speech by keynote speaker, John Healey MP, but arrived in time to hear Cllr John Cotton explain how they have managed to build 2000 truely affordable homes in Birmingham (must find out why we can't do the same in Newham?).

Jenny Osborne, from TPAS, argued that the greater involvement of residents in procurement processes would save Housing Associations and Council's huge amounts of money.  This makes perfect sense that those who actually receive housing management services will have good ideas about how that service can deliver efficiencies. Again, must chase up Newham Housing Residents Scrutiny which hardly never meets.

Final speaker was Cllr Frank Hont, who is the Housing Lead in Liverpool City Council. I had the privilege of knowing Frank when he was a widely respected regional secretary for UNISON.  Frank talked about the housing challenges that Liverpool faces but also had a swipe at the "London centric" housing policies that the Government keeps pursuing.  He also critised some housing associations for being remote and poor landlords.

In the Q&A I asked the panel if they agreed that the reason that some Housing Associations were  bad landlords was because they were undemocratic and union busters. No wonder some treat residents so badly if they don't even respect the human rights of their workers?

John Healey MP replied to my question by saying that in his past experience as a Housing Minister, you could set standards for housing associations for various things and this could include worker rights in the future and that while they may moan and complain they would deliver.
Afterwards I chatted to LHG members about asking Housing Associations in their boroughs if they recognise trade unions and if not - why on earth not?