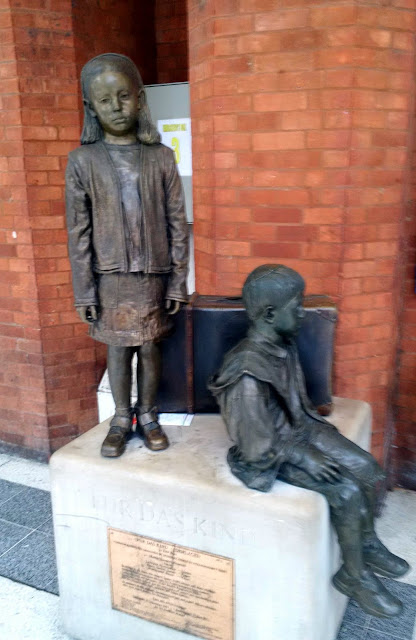 This morning I was on my way to a seminar on opposing the new Housing & Planning Act.

I stopped off in London Liverpool Street station to take this photo of the statute (by the ticket office) in honour of the thousands of unaccompanied (mostly) Jewish children that escaped persecution and murder from Nazi Germany before the second world war.

The children escaped on the so called "Kindertransport" trains via Harwich Ferry and London Liverpool Street station, where they were met by volunteers who arranged safe accommodation for them until the end of the war.

Many of these children never saw their parents again since they were slaughtered by the Nazi.

Last night I sent an email in support of Newham Councillor, Rokshana Fiaz, who had contacted our Council wanting to know what are we doing to support the children in the refugee camp in Calais, France which is being shut down by the French Government.

On twitter I suggested that that the same sort of racist twaddle about the Jewish Kids in 1938 will be repeated today by the media about Syrian children in Calais trying to flee repression and death.
Posted by John Gray at Saturday, October 22, 2016