Remembering HMS Ardent – 25 years after victory in the Falklands 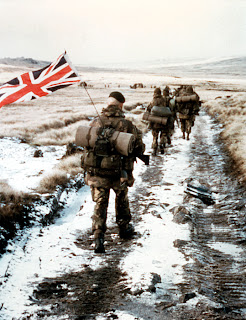 Off message: Yesterday I was listening to the “Today” programme when they interviewed Admiral Sir Alan West, former First Sea lord, over the 25th anniversary of the ending of the Falklands War. Sir Alan had been the commander of HMS Ardent which had been sunk by Argentine jets on 21 May 1982 killing 22 men out of 199 crew. The ship was supporting Royal Marines landing in San Carlos Water. He spoke movingly about how he felt at the time about surviving the attack when so many of his crew had died.
HMS Ardent was hit by 17 bombs in less than 22 minutes. Sir Alan was the last person to leave the ship before it sank.
In 1982 I was a student at Leeds University and had recently joined the Territorial Army. I volunteered for a residential course over Easter with 29 Commando Regiment (Royal Artillery). It was without doubt the hardest and most demanding thing I have ever done. We all arrived by train in the evening (about 25 students, male and female) and told to go for a meal at the mess and to start the course the next morning. Half way through the meal we were told to finish up and change into overalls and boots for a run. There then followed an hour’s run up and down Plymouth followed by us all jumping into the sea, fully clothed, from a local pier, then running back. The rest of the course was pretty much of the same. Lots of running with kit and rifles, timed assault courses, swimming with webbing through outdoor water tunnels, death slides, abseiling and finishing with an overnight exercise on Dartmoor.
For an afternoon off we had a visit to Plymouth Naval base to visit a local warship. We spend a pleasant afternoon on board. The crew were very friendly, enthusiastic and obviously proud of their ship. They showed us all around the ship, practiced emergency drills and what to do if equipment failed. Our chief guide was a very relaxed Aussie (?) who loved the navy. I remember thinking how small the ship was and how close its community must get on active service. The visit was a welcome respite with no one shouting at us or making us do horrible things. The ship was of course HMS Ardent. The next month it was sunk and over 10% of its crew was dead. I don’t know how many were injured. The average age on board was 23 years old. I was then 19.
The course ended with an exercise in Dartmoor in freezing cold conditions. We bivouac overnight before a dawn mock infantry attack. During the evening one of our senior 29 Commando instructors was holding forth about the terrible state of the youth of this country and how the whole country is "going to the dogs". I am sure that in every army (or navy or air force) and in every age there has ever been, senior non-commissioned officers have been saying this same sort of thing. He finished his diatribe by saying “what this country needs is a bloody good war!” A few weeks later he was shipped out with his battery to the Falklands'.
Posted by John Gray at Friday, June 15, 2007

conflict is indeed a terrible thing and many people died both on the Ardent and of course famously on the retreating Belgrano. Of course one wonders what might have bene avoided if Tathcer hadnt sought ot avoid peace brokerign efforts by the United Nations and others. Equally scary was the agreement of USA to allow usage one nuclear weapons if necessary. This shows only to well how the unusable can become accpetable and why they should be disposed off asap

Blimey Sean, you take me back 25 years with this nonsense. I remember coming across a “Stop the War” demo (circa 1982) marching down the Headrow in Leeds.

There was only about 2-300 protesters with lurid banners and angry young men shouting at passer-by’s with megaphones.

In creditably, shoppers said nothing but then many started to turn their backs to the marchers and stood there arms folded, shaking their heads as the possession went past.

At first some of the marchers started shouting and screaming at these people. Some broad and direct Yorkshire accented remarks where made in reply. It then all went very quiet.

Once the march had passed people turned round and continued shopping as if nothing had happened. Actually something had…

not sure what is nonsense in me having an opinion about the rights and wrongs of war but there ya go each to their own. I do find it scary to this day that there was an acceptance of the potential usage on nuclear weapons over the Falklands/Malvinas islands

Hi Sean
Yes true, agree to differ and all that, but I have never come across any believable arguments from anyone, that a nuclear strike against Argentina was ever considered a real option at the time? Maybe it was just me and all that tetley's?