Gordon and my bottle of red, red wine 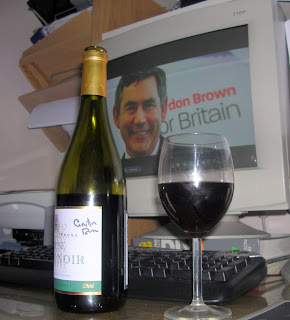 Tonight I am busy polishing off a bottle of House of Commons “Pinot Noir”, allegedly signed by Gordon Brown (see picture). In 2005 I went to the general election campaign launch of Poplar & Canning Town MP, Jim Fitzpatrick, in Trussler Hall, Poplar, E14. There was of course the inevitable Labour Party raffle. I think it was Jim who called out the tickets. To my surprise my raffle ticket was pulled out and Jim announced that the prize was a choice between either a bottle of House of Commons white wine, signed by Tony Blair or a bottle of red wine, signed by Gordon Brown. There was a momentary silence while I made up my mind.

At the time I pledged to only drink the bottle when Gordon became Prime Minister. The bottle is now being rapidly drained with my better half as I blog (real time).

Cheers! Hope you drank prudently and didn't get a hangover. John

Thanks John
Prudence wasn't invited - not enough for three!