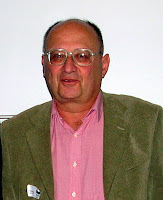 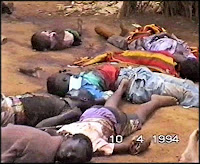 The first speaker at the conference was Norman Geras (University of Manchester). As mentioned in my previous post I was late and missed the beginning. His subject was not arguing over the pro’s and con’s of any particular military intervention (such as Iraq war), rather he was concerned with defects in international law which in his view, do not prevent genocide taking place. Current International law should not only be about punishing human rights violators (however imperfectly - the various current war crime tribunals), rather its should be about preventing or stopping the abuse taking place in the first place.

He argues there is an existing international duty to intervene in cases of “genocide”. He explained that under existing international law there is a big problem, since the international community requires the same standard of proof for intervention as for prosecution. What this means is that after a massacre, such as what happened in Rwanda, there will be physical proof, “beyond reasonable doubt”, that illegal “genocide” has taken place (loads and loads of dead bodies). However, the same standard of proof is needed to even contemplate action to prevent genocide which is actually taking place (Darfur?). What this means in practice is that under international law individual countries or the UN will not have clear legal authority to intervene until the bodies can be stacked up and counted. Which is of course nonsense? This will not usually happen since it is often impossible to gather evidnce to a standard “beyond reasonable doubt” in such circumstances. I think he suggested that intervention action should be allowable on a “balance of probability” basis. What we would want as internationalists is the ability to support intervention (preferably but not exclusively by non western powers organised by the UN) in developing countries to tackle genocide not just try to prosecute the ring leaders at a later date. Makes sense to me.

He recognised that there are problems. Should the “duty to intervene” be supported by sanctions against countries who refuse to play their part? However, he did end on a positive note. Despite the repeated failure of the international community to stop genocide since 1945 there had been genuine steps forward. Much more however needs to be done.
Posted by John Gray at Sunday, June 03, 2007