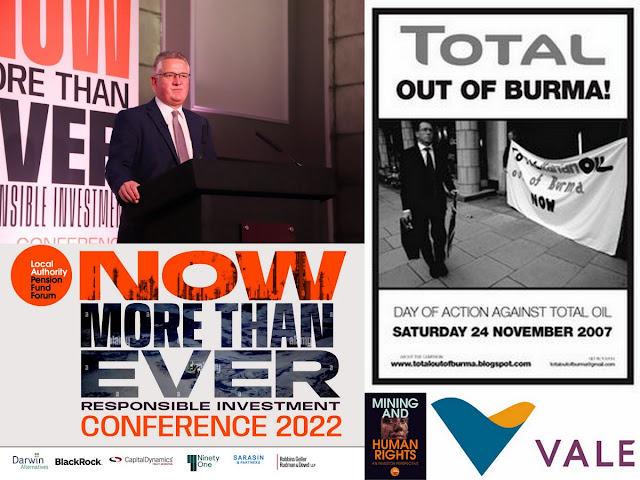 Last week I went to the Local Authority Pension Fund Forum (LAPFF) Annual 3 day Conference in Bournemouth. I have been one of the Joint Vice Chairs for the past 3 years and an active participant in LAPFF both as a trade union pension rep and a Councillor for many years.

LAPFF is the leading voice for Local Authority Pension Funds in the UK and its members assets exceed £350 Billion.

There were Councillors, Council officers, trade union reps, fund managers, advisors and guest speakers from all over the UK and even the world. Some joined virtually while most were present in person.

On day one, the Chair of LAPFF, Cllr McMurdo, formally opened conference and the first presentation was by a representative of  French energy giant Total on its recent (welcome) withdrawal from  Myanmar.

The conference is held under what is called "Chatham House" rules which means that you should not repeat what is said without the permission of the speaker. I have reached out to the speaker since I am genuinely interested on the reasons why Total did not decide to pull out in the past (also see picture in collage) during previous horrible military dictatorships and repression. It would be good to understand why now and what actually changed their mind?

Next was a powerful presentation on the recent visit to Brazil by LAPFF to the local communities who had suffered grave loss of life and devastation following the apparently negligent collapse of  the so called Tailings Dams.

There was a virtual video with a community leader from Brazil (name withheld due to fears for their safety) and from a concerned Brazilian investor. The Chair of Vale (the 5th largest Mining Company in the world) actually came in person to conference and also spoke to us.

It is more than a pity that some large mining companies have failed to engage with LAPFF on this very important matter.