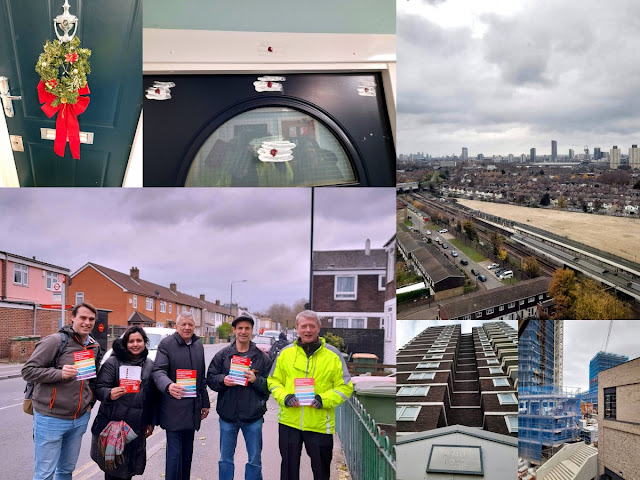 On Saturday after my surgery I joined the new Councillor team at the also new ward of Plaistow West and Canning Town East. We were joined by our Greater London Assembly member, Unmesh Desai.
On the whole a fairly positive canvass. Lots and lots of case work (mostly housing repairs). Unmesh and I would knock on a door and ask the resident if they wanted to speak to one of their local Councillors about any issues and if they said yes, we would grab the nearest Councillor, then move on to the next door.
Most of us were using the Labour Party mobile telephone app "Doorstep".  Names and addresses to visit are downloaded to your phone and you can input and upload any information in real time. It is much better than the old paper based system but I find it is liable to crash and freeze from time to time (but the data seems to be not lost). Probably my phone at fault.
I had a fascinating chat with one resident about the religious symbols on her front door (see top of collage next to xmas wreath - another religious symbol of course) who explained they were about bringing blessings to the local community.
Cllr Simon Rush asked one resident what he would like to see politically and was told "get rid of this Tory government". Agreed!
I was surprised to find door numbers in one terrace street jumped from 28 to 36? While I asked the resident why this was? I was told "The Luftwaffe"( it had been bombed during the war and less homes were built to replace those destroyed).
Interestly I came across, yet again, a number of residents who had previously been identified as Conservatives or "Against Labour", who now said they would vote Labour in a future election and the only people who said they wouldn't, were those who said they don't vote in elections. We need to find ways to win these non voters over.
After the canvass we had a quick drink at the Black Lion, then I cycled back home for a late Keto Brunch.
Posted by John Gray at Monday, December 05, 2022