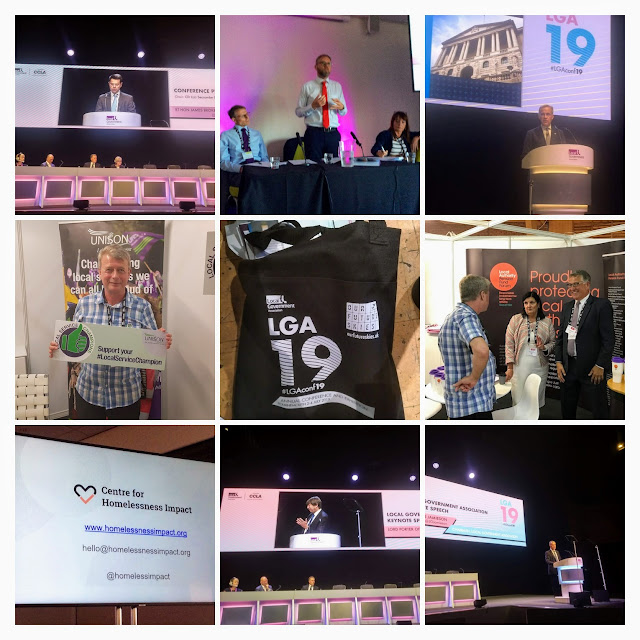 Yesterday I went to Day One of this year's Local Government Conference in Bournemouth representing Newham. This is the annual conference for all councils in the UK and all political parties.

I arrived to hear the the debate on climate emergency & UN sustainable development goals moved by Bristol Mayor, Marvin Rees. To my surprise (not the only one that day) there was no speakers against and it was passed unanimously.

During speeches by the outgoing and new Conservative Party Chair's of the LGA, I was astonished (and pleased) by the "one nation" Toryism I heard. I felt that I could be (almost) in a meeting of "Defend Council Housing" as both Lord (Gary) Porter and the new chair, Cllr Jamie Jamieson between them praised Council Housing as cheaper and better quality; called for reversal of austerity cuts and pointed out that local authority schools do better than academies.

Secretary of State, James Brokenshire, started his speech by saying because of the leadership election and Brexit he cannot announce anything and then spent the next 10 minutes proving it.

The keynote speaker was Governor of the Bank of England, Mark Carney, who successfully charmed the conference. I was able to ask him a question that if there's an economic trade shock from Trump or Brexit, will there be a role for councils to build homes as a fiscal stimulus? He replied basically Yes, you get more multiplier effect, "more bang for your buck", from investment in infrastructure /housing but he doubted that councils had capacity to build to scale needed.

I went to the UNISON conference stall and supported their #localservicechampions campaign and next door and met chair of LAPFF (Local Authority Pension Fund Forum) Cllr Doug Murdo.

The workshop on preventing homelessness & rough sleeping chaired by Cllr Nick Forbes (Newcastle) was fascinating. How come Newcastle only has an average of 6 rough sleepers per night?

In the evening I went to a fringe organised by the LGiU and Camra on the importance of supporting local pubs (no particular reason of course) then in the evening I met up for a late night chat with my Newham Comrades Mayor Rokhsana Fiaz and Cabinet Finance member Terry Paul who travelled down after our Cabinet meeting.

Back to London in morning for UNISON NEC meeting.