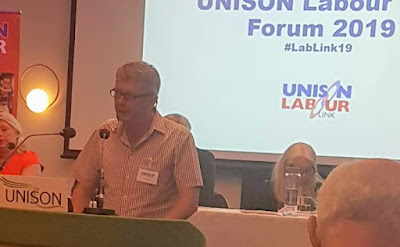 This is my speech to UNISON Labour Link Forum on behalf of the National Committee on Government cuts to Local Government.

"Forum, the scale of the problem is simply staggering.

While at the same time, councils have had to deal with rising demand for its services. For example.

· the number of “looked after” children living in our care grew by 11%; and

So Forum, we have vulnerable families, children and the elderly suffering the most from vicious Tory and Lib Dem austerity

But surely Forum, last year didn't he Tories claimed that austerity is coming to an end? I think you will find Local Government beg to disagree.

A few special funds, here and there maybe, but nothing, repeat nothing, which meets the real needs we face.

And anything really new in the current Tory leadership debate? Sorry, a big fat zero; nothing about the role of Local Government and its services

A few crumbs on social care but NO concrete plan.

It is only fair to say that Labour’s last manifesto, while excellent on many things, was short on detail for local government – and rather short on cash as well.

However, our colleagues in Labour Local Government, do have plans for what will be needed from day one of a Labour government, to begin the task for putting local government finance back on firm foundations.

And most importantly, where Local Government workers get a fair reward.

UNISON is best placed to be the voice of the local government workforce and residents.

We must build a campaign,

This week at local government association conference, Even Tory council leaders, were admitting that a third of all councils are frightened they will run out of money for statutory services, never mind everything else.

We must be the champions of Local Government across the whole country.

Forum, get behind the motion and fight for local government. Please support".

John. Get with the programme...You can "beggar belief"...but not "beggars to disagree"... where did you get your "educashun"? You make a lot of basic grammar errors of this sort in your blog. Mind you the audience probably didn't notice anyway...

Many thanks for pointing out the typo. I actually meant "beg to differ" but It is good to know that I have a grammar fascist (and no doubt real one) proof reading my copy for free. Keep up the good work!

You should be more careful before casting accusations of "fascist" around. You use the term far too lightly. Labour politicians have become very familiar in the past few years with anti-Semitism. It is truly shameful that Labour are under formal investigation by the Equality and Human Right Commission, who are looking into whether there have been "unlawful acts of discrimination". Fascism is perhaps a lot closer to home in Labour.

It seems you don’t understand English or politics. While all fascists are racists not all racists are fascists. While I am sure that the EHRC will quite rightly lambast Labour for its failure to deal with its small number of racists properly at least the Party is now trying to deal with the problem and not completely ignore it like all other UK political parties.

Well John according to numerous party whistle blowers, more than 60 labour peers, and a large number of prominent MP's (not to mention the chief Rabbi)..the Labour Party "is" failing to deal with the problem. The fact that you too can't even see this means you too are part of the problem. Ignoring the problem is exactly what Corbyn has been doing. Other party's may well have a problem but when you are in the gutter its probably not a good plan to start throwing mud. Don't forget the Panorama Labour whistleblowers were talking about dozens and sometimes hundreds of complaints a week...and whether you like it or accept it or not that far exceeds anything seen in any other party. Shameful.

You are face to face with the realization that the Party you have devoted so much effort and time has become quite ugly.... so you answer it first with accusations of fascism and then by trying to treat the comments as a joke. It must be hard for you watching all of this unfold.. the nasty party.

Or to quote the 67 Labour Peers..."the (Labour) party was no longer a “safe place” for its members and supporters" (The Guardian)… and your response?... "its fake moral outrage"... wake up and smell the coffee John.

Yawn. Looks like I touched a nerve with your fake outrage. Sort out the racists in your party before trying to lecture anyone else. Your hypocrisy is simply staggering. Now please troll off and play elsewhere and leave real politics to the grown ups. Bye, bye.