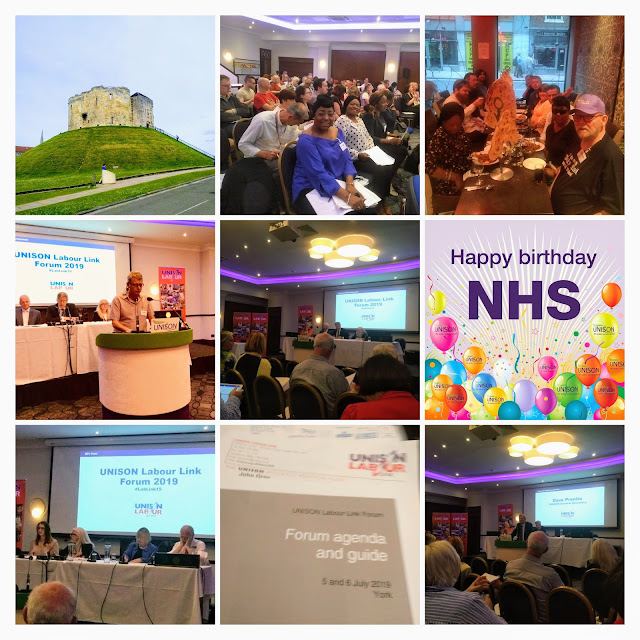 I arrived yesterday morning for a pre meeting of the National Labour Link Committee where we agreed policy towards toward motions and agreed our speakers. In the evening I chaired the London regional delegation meeting, after which 11 of us went for a meal in a local curry restaurant.

Forum started at 9.30am with a report by Standing Orders committee followed by debates on motions. I spoke on motion 2 "Cuts in Local Government" on behalf of the National Committee.  Next was a speech and Q&A by Richard Corbett MEP, leader of the European Parliamentary Labour Party. Richard is quietly spoken for a politician but gave an impressive and good humoured analysis of the Brexit crisis. I just hope he is right that backing a second referendum will not damage Labour's election prospects.

After more debates on motions, our Keynote speaker was our General Secretary, Dave Prentis, who pointed out that there is no such thing as a "left wing No Deal" Brexit. "No deal" will be hugely damaging.

Lunch was followed by a workshops and at 4pm there was a panel of MPs who used to UNISON activists,  Melanie Onn,  Liz Twist and Daniel Zeichner. Mel told Forum that our Party needs to unite and get its act together to defeat the Tories and "stop the nonsense" (to loud applause).

Later that evening there was the famous Labour Link meal for delegates at the hotel. A good time was had by all. Forum restarted 9.30 sharp the next day.
Posted by John Gray at Friday, July 05, 2019

Who pays for all these junckets?

Yawn. Cowardly troll alert. Members choose to belong to unison or not. They then choose to pay into a political fund or not. Said members then elect delegates to an annual policy making conference.