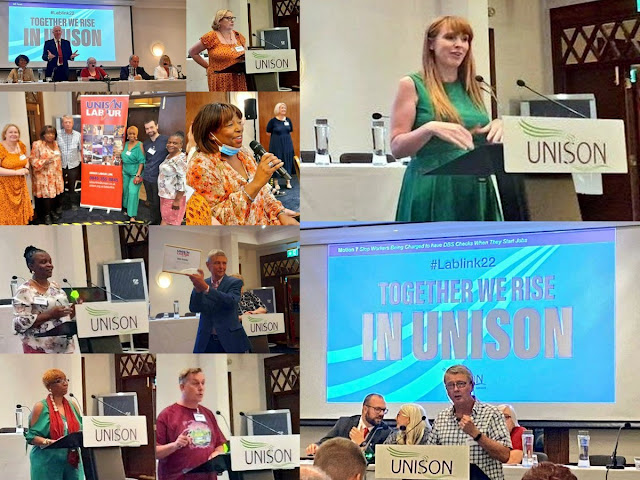 Picture collage from UNISON Labour Link National Forum which took place on Friday in York. This was the first "in person" Forum since 2019 due to Covid. "Labour Link" is the (voluntary) political fund in UNISON that is affiliated to the Labour Party.

I was an elected member of the Greater London delegation. We had arrived the night before for our delegation meeting (followed by delegation meal).

Forum started with a well deserved presentation to our former General Secretary, Dave Prentis, thanking him for his decades of service to the union and to Labour Link. Dave also spoke about the battle ahead to get a Labour Government elected. There was a minutes silence to remember UNISON members who had passed away since we last met. Followed by a report from the Standing orders committee and on our Annual report.

Next we began to debate motions. I was really pleased that during the course of the Forum nearly all members of our delegation spoke. Some of them for the first time. I moved our regional motion on "Stop Workers Being Charged to have #DBS Checks When They Start Jobs" which was passed unanimously. I will post on this important campaign another time.

Before Lunch we had Angela Rayner MP, Deputy Leader of the Labour Party (and former UNISON activist who I remember well attending these forums) give the keynote speech. She started by breaking the welcome news that both she and Keir Starmer had been cleared by the Police over the so called "BeerGate" investigation. They had both pledged to resign if they had been prosecuted. A clear sign of integrity in contrast to the appalling behaviour by Boris Johnson. Angela gave a barnstorming speech, without any notes and dealt decisively with a range of questions during the Q&A.

After lunch we continued to debate motions and managed to complete all 18 by 3pm. After a break, we had a MPs Panel. Four MPs & (and also UNISON members) spoke about their roles & took part in Q&A. Daniel Zeichner MP, Liz Twist MP, Bambos Charalambous MP and Chi Onwurah MP.

I asked the panel the question about what would advise us to say to working class Tories when on the campaign trail for Labour? Some good responses about listening to people and showing them respect but also asking the question - do they feel safer in their communities under the Tories and are they better off financially?

Our National Chair (and NHS nurse) Linda Hobson closed the Forum and we look forward to next year's (hopefully we will return to it being a 2-day Forum).