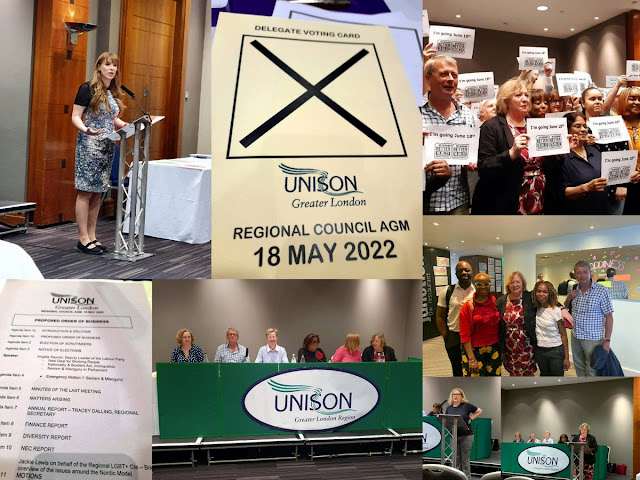 This morning we had our first in person Greater London UNISON AGM since 2020. It was marvellous to be meet old friends and comrades (and new people I had only met before on video). While I did not enjoy the travel "experience" on route via the London Central line, I think you cannot beat real human contact and engagement (when safe to do so).

I was really pleased at the attendance (about 130 delegates I think) since we were worried that people would not travel into central London.

Our keynote speaker was deputy leader of the Labour Party and former UNISON activist Angela Rayner, who gave a barnstorming speech attacking the Tories and on how much she owed to UNISON and the wider Labour movement, for supporting her from being a 16 year old single mum social  care worker into a union activist then becoming a MP.

Angela had a fantastic reception from the AGM and she stayed for the following debate on an emergency motion on "Sexism & Misogyny".  There was some brilliant speakers on this motion which was passed unanimously but some breathtakingly hypocritical contributions from hard left extremists, who spoke in favour of the motion, at the same time they support someone sacked from their job for bullying and harassing 14 female UNISON members??? I am so glad that we did not invite anyone from the current UNISON "Presidential" team to speak.

Our regional secretary, Tracey Dalling, gave her report and answered questions from the floor. She is off at the end of the month to take up her new position as regional secretary for Scotland and will be missed. Our London loss is Scotland's gain.

I gave my finance convenor report (and the diversity report since the convenor Cynthia was unable to attend). We had a briefing by long standing member, Jackie Lewis on ending the UNISON support for the "Nordic model" for sex workers followed by a motion which was passed.

There was a fantastic (and at times emotional) report by the secretary of UNION London Ambulance Service, Eddie Brand on their 1200 mile drive to the Polish/Ukraine boarder to deliver 10 ambulances, medical equipment and humanitarian supplies to their fellow trade unionists in Ukraine. I am so proud of this act of solidarity.

Our final speaker was our general secretary, Christiana McAnea, who told it as it is - why we need to get rid of Boris Johnson, why we need an alternative government and how we can help bring this about by demonstrating at the TUC demo then rally on Saturday June 18.