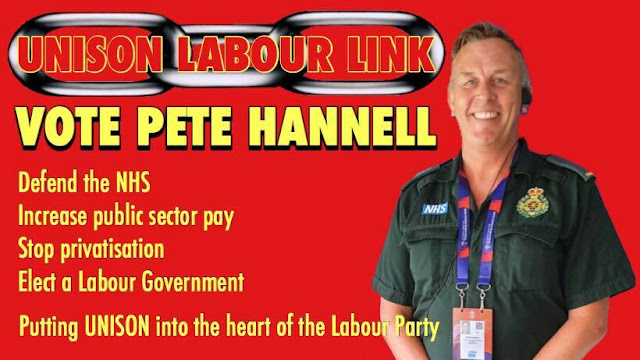 I am a front line NHS health worker, a paramedic in the London Ambulance Service, working shifts while still being an active UNISON steward, representing and defending members for 25 years. As a long standing branch activist and LAS Labour Link officer I have experience of being on committees and know how things work.  I have also been a loyal Labour Party member for many years.

My aim is to get a Labour Government elected and into power and for Jeremy Corbyn to be our next Prime minister. Never forget that we, the unions, created the Labour Party because workers needed political power and protection.

That is why we must get win power at all costs. In order to win, the Labour Party should be taking more notice of UNISON’s policies on defending the NHS, increase public sector pay, stopping all privatisations and defending our pensions. These policies are all very popular with the public and if Labour adopted UNISON’s policies we will win the next general election.

We need more ordinary rank and file union members representing UNISON at the highest level within the Labour Party. If I am elected as your London delegate I pledge that I will  :-

·         Oppose privatisation of the NHS and all other public services

·         Support our claims for decent pay rises for all public workers

·         To report back on every Labour committee meeting I attend to all London UNISON branches and tell you what is going on.

Thank you for reading this statement and I hope you will consider voting for me.

Thank you for putting my election address on your personal blog John. I hope people read it and consider voting for me.

My pleasure Pete. Now go out and win!!!

Pete is the MAN!