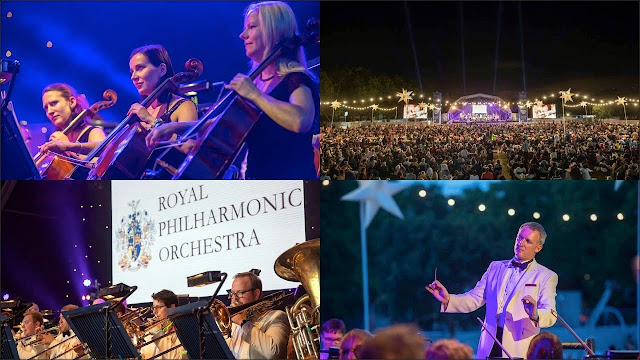 "The Royal Philharmonic Orchestra (RPO) and a fireworks grand finale will again delight audiences on Sunday night. The RPO has been performing at Under the Stars for more than six years bringing an ensemble of up to 75 musicians. They cover a huge range of music from core symphonic music by composers such as Beethoven and Tchaikovsky, through the world of musical theatre and up to modern day film soundtracks.

This year’s concert will feature traditional proms in the park favourites under the baton of ever popular conductor John Rigby who has worked on film, screen and stage music.

Making her first appearance is vocalist Alison Jiear who trained classically in voice and piano at Queensland Conservatorium of Music in Australia before moving to the UK in 1988. She has performed in the West End while working on numerous other projects.

Also debuting is British baritone Ross Ramgobin who attended London’s Royal Academy of Music where he gained an MA in Vocal Studies and then his Advanced Diploma from the Royal Academy Opera. He has performed at opera houses all over the world.