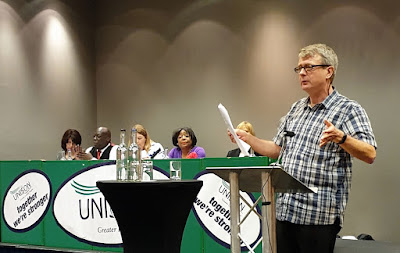 At the UNISON Housing Associations branch AGM on 12 March at House of Commons I stood down as branch secretary after 9 (or 10) years but was elected as Branch Chair. Below is my report to the AGM.

"While it has been another challenging year for members, the branch and UNISON, we are increasing in membership despite austerity and government attacks. The branch membership is stabilising and “Community” (UNISON members who work for Housing Associations and Voluntary sector) is the fastest growing part of the union, which is now the largest trade union in the UK.

The branch is not just about pay, casework and representation if you get into a row at work or become sick, but we are also about campaigning for change. For example, we helped with the launch of the UNISON “Violence at Work Charter for the third sector” and our activists have shown solidarity by attending demonstrations, such as, the TUC march and rally in May and supporting numerous other lobbies, protests and industrial action.

Many thanks to our staff and Regional officials, for the hard work and support which we have received from them. Also, my thanks to branch executive members for giving up their evenings to attend meetings and carry out branch duties.

The unsung heroes of the branch are of course, our volunteer workplace reps and convenors, who day in and day out, represent members at hearings and negotiations. Without them nothing would be achieved.

The branch has played a full role in UNISON’s internal democracy, attending various conferences and speaking on policy motions and issues which are important to our members. Our motion at our Community conference last year was about how it is a disgrace that some housing workers live in worse conditions than those they are trying to house was passed unanimously.

Despite the potential horrors of Brexit, 2019 should be an exciting time for the branch to finally get our structure and finances on a permanent basis, improve our ICT and provide better support for reps and carry out more campaigning on issues. We need to fight the resurgent hard right and the scandalous gender pay gaps which blight so many of our workplaces.

Finally, after I think it is nine or ten years in the position I have decided to step down as Branch secretary and to give someone else the opportunity. This does not mean that I intend to stop being active in the branch Executive and will continue to serve on the Community NEC seat.