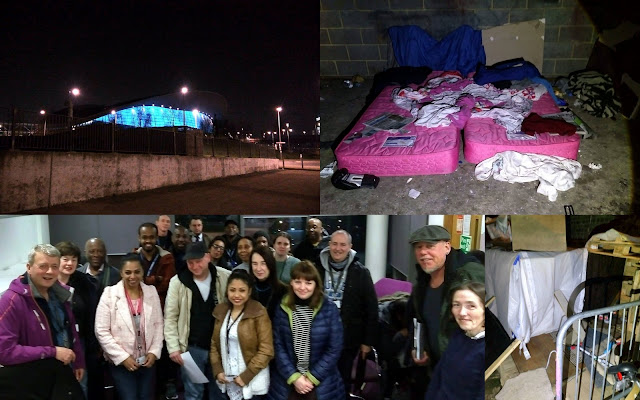 Picture collage is from early this morning (midnight to about 3am) when I took part in my second Rough sleeper count. Newham has received money from the UK Ministry of Housing to tackle rough sleeping and as a condition of this money, it has to carry out bi monthly counts to see what impact the money has had..

My first count on 1 February took place in a mini blizzard. This morning was warmer but still no place for anyone to be sleeping outdoors.

Some 29 volunteers and homeless charity outreach workers met in Newham Dockside building at 10.45pm including a number of Councillors and my cabinet colleague for Adult health, Susan Masters.

We were given a briefing on what to do and the reasons why, then we were split into teams of 3. I was sent out with a Newham Council officer volunteer driver and the team leader, was an experienced outreach worker from the homeless charity SHP.

Our team of 3 had 12 locations to check, that in the past had experienced people rough sleeping. By coincidence this included the West Ham ward that I serve as a Councillor, also Stratford and parts of Forest Gate. We met during the night 3 people who were sleeping outdoors but only 1 counted for the purposes of the survey, because the other 2 had no bedding with them and said they will be staying the night elsewhere.

We went to a number of locations where there was no one actually sleeping there at the time but there was clear evidence that someone had been recently. Including a purpose built encampment hidden away in (I believe) the Queen Elizabeth Olympic Park.

I have already contacted Newham Housing services about unacceptable estate management issues I came across and also I will contact a large local Housing Association about similar problems.

We finished about 3am and my fit watch said I had walked over 5000 steps during the count.
Posted by John Gray at Friday, March 29, 2019