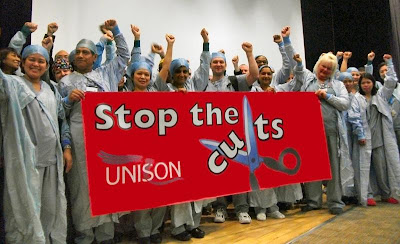 Despite the great news today about the Tory climbdown over the privatisation of our Forests and the apparent retreat over reducing Housing benefit for the unemployed.  This Government still shows its nasty, vindictive side by the announcement that "Leading Hospital" St Georges in Tooting London will suffer £55 million in cuts and 500 hospital jobs (10%) cut.  Three wards are due to close.

UNISON PRESS RELEASE "Staff at St Georges Hospital, South London have acted with growing shock and anger at the announcement that 500 posts ( almost 10% of the workforce)at the hospital are to be axed as part of the Governments 20 billion NHS cuts programme.

St George's will now be forced to cut £50m from its annual budget, cut 500 medical nursing and health care posts close wards, cut approximately 100 beds, and cap the number of births in its Midwifery unit to 5,000 a year Posts affected include frontline doctors, nurses and professional staff.

Michael Walker, UNISON Regional Officer, states "In a week when the bankers are set to receive huge pay rises and multi million pound bonuses, we are going to witness the spectre at St George's of dedicated nurses, doctors and health staff losing their jobs. How can that be fair or right?"

Nurse Jane Pilgrim, UNISON Nursing Convenor at St Georges Hospital states:
"We were told by the Government that there would be no cuts in frontline posts but in reality the NHS is witnessing swingeing cuts to frontline services every day".

Geoff Thorne, UNISON St George's Branch Secretary stated: "Before the General Election Andrew Lansley visited St Georges Hospital and gave a personal guarantee to staff that there would be no frontline cuts in the NHS"

Nora Pearce UNISON Midwifery Convenor states: "Capping the number of births at St George's to just 3,000 a year will mean thousands of local women will no-longer be able to have their babies at St George's, denying them the back up and confidence they know comes from having a baby at an internationally renowned teaching hospital.

Michael Walker, UNISON Regional Officer stated: "UNISON will be working with St George's Hospital management to mitigate the impact of these cuts on patients and staff. Mr Lansley needs to urgently recognise the damage he is causing to the NHS with these unprecedented levels of cuts".

"We fear these cuts are just the prelude to even greater cuts in our NHS when the Government unleash GP Commissioning and GP's are forced to ration care.  "We urge all local Member's of Parliament, of all political persuasion’s to intercede and urge Andrew Lansley the Conservative Secretary of State for Health to halt these disastrous cuts at St George's before patient care suffers.
Posted by John Gray at Friday, February 18, 2011

What's your view on the council leaders who are being paid hundreds of thousands of pounds then? This all happened under Labour - was this the right priority? You are always going on about bankers - what about bloated greedy council bosses...how could labour let this happen?

Hi anon
I think they are paid too much but why don't you compare with the hundreds of millions pounds being paid to the investment bankers who practically destroyed our economy due to their flagrant dishonesty and greed? Never mind the Executives of the FT 100 who are paid 60+ times what the lowest paid get.

Never forget that there use to be a widely accepted "maximum pay" for CEO's agreement in Local Government until Tory Westminster and Wandsworth Council broke it and started to pay "the market rate".

The hypocrisy of Pickles to now complain about the market his Party created.

Who cares where they are? It should not have happened. That's the problem with Labour administrations.

..and it only happened anon because of tory "free market" fanatics.

Why doesn't Pickles demand there is a new maximum pay scale for all CEO's? I am pretty sure if done properly Labour Councils would take such a proposal very seriously.

Can you not guess why the Tories are opposed anon?

There is no comparison between the head of a public company...and a gold plated head council job, risk free. No profit and loss, no shareholders, no legal liabilities, no new product development, no start ups. Taking over something that's been running for 200 years and is funded by council tax vs. running a company have nothing in common. I guess you have zero experience of company life whereas we are all hostage to crap council services.


You don't know what you are talking about anon. I have worked in private and public sector and do (on this issue anyway)