I was saddened to hear of the death of Ted. He was a good age (87) and had battled ill heath for decades but I have lost a good comrade. Ted was "old school" East End. He lived in West Ham ward but if you asked him if he was local, he would be taken aback and say no, he was from Canning Town! (the next ward to West Ham)
At 18 he was conscripted into the Army and served as a Rifleman overseas during the Malayan Emergency. In the Army he learnt how to drive a Heavy Good Vehicle and when he was discharged began a career as a lorry driver, much of the time transporting dangerous industrial chemicals up and down the land.
Being a lorry driver he became a member of the T&GWU union and became embroiled in a number of tough disputes with management to protect workers rights. There was no "ACAS conciliation procedure" in those days.
He would tell me all about these disputes when he was acting as my "bodyguard" during my Councillor surgeries in the TRA room (following the stabbing of East Ham MP, Stephen Timms, all Newham Councillor surgeries are supposed to have someone nearby in case of  problems).
As well as a trade unionist he was also an active tenants rep. Ted remained a Council tenant all his life and refused to exercise his "right to buy" his home.
The top picture is my very favourite of Ted, making his point, at a coffee morning surgery with our West Ham MP, Lyn Brown in 2007 (and local Councillor at the time, Judith Garfield).
Below is the award by Ed Balls MP in 2013 to Ted of a Labour Party "Certificate of Merit" marking his 40 years of service to the Party. Ted only turned up since we pretended that a friend of his would get be getting the award. He never, ever, wanted any "fuss or bother" for himself.
Ted is being buried this Thursday and in accordance with his wishes, his family want a private funeral. I will be attending to say goodbye to Ted and the ward will be sending a wreath on behalf of all of us. 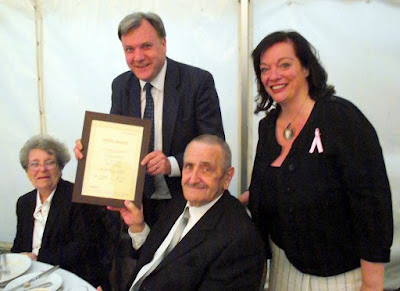