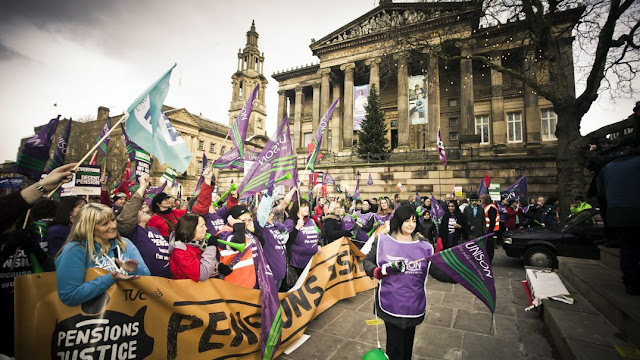 Excellent article by my Scottish UNISON NEC Colleague, Stephen Smellie in yesterday's Morning Star. While the Local Government Pension Scheme (LGPS) is slightly different in Scotland than England and Wales (stronger trade union rights for example), I would support pretty much all his points for south of the border.

Our pay, our pensions

Many pension funds end up invested in shares of fracking companies or those supporting the illegal occupation of Palestinian land and other unethical practices. But union reps are leading the way in questioning where pension funds are invested. STEPHEN SMELLIE reports

WOULD you give your boss 20 per cent of your wages every pay day to look after for you?

Would you be happy for them to use that money to speculate on the stock exchange, putting your money into arming dodgy regimes, harming the health of children and destroying virgin forests in the Amazon?

Sounds like some dodgy racket but that is what many workers who are in occupational pension schemes do every pay day.

In the Scottish Local Government Pension Scheme, which I am a member of, between 5 and 8 per cent of our wages goes into our pension fund.

The council employers put in between 13 and 20 per cent of the value of our wages.

Both the employee and employer contributions are deferred wages that otherwise should be in our wage each month.

The pension fund manager, in the vast majority of cases, commissions external investment managers to invest my deferred wages with the intent of making a profit so that when I retire I will have a healthy pension.

These external investors take a commission on every bundle of millions they are asked to “look after” and a further commission on every transaction they undertake with my pension pot and rarely actually reveal how much all this management of my deferred wages is costing the pension fund, that is, costing me, who hasn’t had a decent pay rise in many years, and my cash-strapped council employer. Now that does sound like a dodgy racket.

I have no say over where the investments go. Currently they go to buy shares in companies that are investing in fracking and the destruction of indigenous people’s homes in the Amazon to allow access to climate destroying coal reserves; making money out of companies supporting the illegal occupation of Palestinian land; tobacco companies that market their product to children in the developing world.

While most investments are in less dubious areas of capitalist speculation, including a relatively small amount in infrastructure, renewable energy and social housing, it is still true that millions are in highly unethical investments and that I, as a pension fund member, have no say in this.

Fortunately, thanks to the efforts of trade unions, led by my own union Unison, and allies in civic society campaigning around ethical investments, this is beginning to change.

Pension fund managers, some very unwillingly, are being forced to address these issues.

The advent, in the past few years, of trade union members on pension fund boards has allowed for challenges to be made to the previous arrangements where pension managers were given almost free rein to do what they wanted as the council committees nodded through annual reports that were opaque.

After years of campaigning the trade unions have secured agreements that pension funds will only engage external managers who agree to sign and adhere to a transparency code which requires them to give a full account of all the costs that they are charging to the pension funds.

This will allow pension funds to compare the costs they are being charged with what other funds are charged.

Remarkably, and predictably, this has led reductions in the fees being charged to pension funds.

The trade union reps are leading in questioning where pension funds are invested. Unison, supported by a number of environmental campaign groups, launched a campaign last year for disinvestment from fossil fuels.

Millions are invested in companies that continue to trade on the exploitation of more and more fossil fuels when government policy across the world is moving away from the high-carbon economies and accepting that fossil resources should mostly be left in the ground.

Investments in fossil fuels is not only encouraging more damage to our climate but also risks our pension funds being left with “stranded assets” as the value of these companies declines as the world moves to a low-carbon economy.

In Scotland, Unison is launching a campaign to argue that the 11 local government pension funds, run by 11 different managers and supervised by 11 different committees and boards, should be merged into one Scottish fund.

This would create a significant fund that would be able to make huge savings in the cost of the external investment management.

Instead of 11 funds employing the same companies and all being charged separately there would be one contract negotiated and subject to the most transparent accountability.

A Scottish fund would have the advantage of larger sums to invest, making it a major player, able to get better investment returns and have greater influence over ethical investments.

There would be greater potential to invest in infrastructure projects that can provide benefits to the community as well as good returns for the pension fund members.

In-house teams in Lothians and elsewhere have proved successful and cheaper and all of Scotland should be able to benefit from this.

Research shows that hundreds of millions of improved returns and savings in costs could be achieved if the 11 Scottish funds were merged.

That is hundreds of millions of pounds that could both improve the pensions of local government workers and reduce the costs to the employers, and ultimately the council tax payers, of pension contributions. Savings that could then be used for better pay rises and protecting local services.

Unison will be targeting Scottish Finance Secretary Derek Mackay who is considering options for the pension funds. One fund makes sense and we hope to persuade him that one fund is the best option.

Trade unions have in the past only got active around pensions when proposals to increase members’ contributions or cut benefits have been proposed. That is changing.

Pensions are our deferred wages and we are entitled to have a say in how they are managed for our future.

Unison and our sister unions are leading a movement for decent, sustainable and ethical pensions. These are our pensions. Why shouldn’t we have greater control over them?