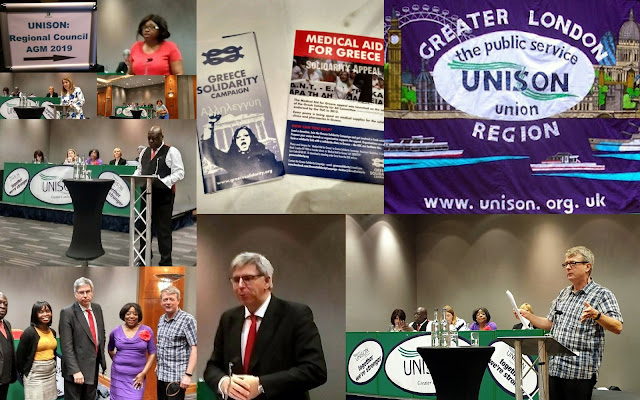 The AGM was probably in my view the most constructive and positive one, I have ever been to in all my years as a UNISON activist. The UNISON Lay President, Gordon McKay (a NHS nurse), gave a typical self deprecating but very passionate keynote speech about the simple cruelty that this Tory Government shows towards the poor and the vulnerable.

Next a great presentation by http://greecesolidarity.org/ about the work they do to support the people of Greece and a plea for support from UNISON branches.

I gave my financial report to the AGM and was pleased that there were proper questions and challenges by delegates.

Deputy Convenor, Conroy Lawrence, who was also re-elected had nearly everyone in tears as he moved his branch's motion on Gun and Knife crime, and told us why this is so important to him as he explained about the senseless gun murder of his own son.  Branch activist, Misty Harmon-Russell also spoke during the debates.

Our Convenor, Yvonne Green, was re-elected unopposed and showed why, by her lovely polite, quietly spoken but firm chairing of the meeting. This is a real skill.

In the evening I had my Greater London UNISON Housing Association branch executive at the Hyde Housing Association headquarters and was unanimously nominated to be the Community NEC General Seat candidate (with my good comrade from Wales, Denise Thomas and other sensible broad left candidates )