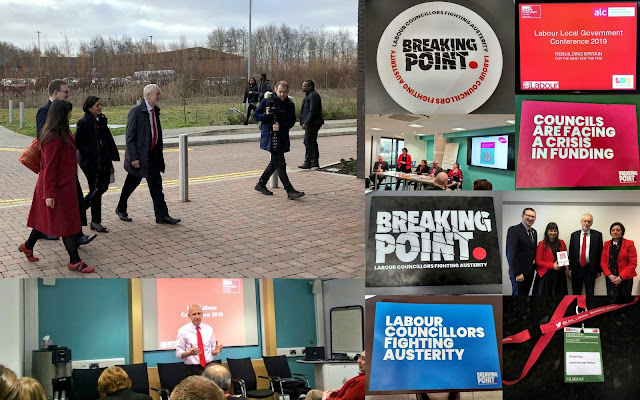 Last weekend I went to the Labour LGA conference in Coventry. There were Labour councillors from all over England. On the Friday evening Tom Watson was the speaker at a buffet meal. The next day Jeremy was our keynote speaker (see main picture with Jeremy and Newham Labour directly elected Executive Mayor, Rokhsana Fiaz, both arriving at the conference following a personal meeting)

At the start of conference, local Cllr Jackie Taylor welcomed us. LGA Group leader, Nick Forbes, reminded everyone that we are are a Labour movement family with the odd wayward teenagers & grumpy uncles (I plead innocence).

There were a number of seminars and fringes including an important one on "New municipalism community wealth building" and another with John Healey MP on housing campaigning. Where following negative comments about the problems caused by Airbnb in some areas, I had to admit to staying in a flat for this weekend via this said website.

I am so pleased that Labour has committed to getting rid of section 21 (no fault legal evictions). We also need to support the Tenants/leaseholders representative movement, since we will never get first class housing services without this.

Rokhsana also skyped into two Newham Citizen assemblies that were being held in East Ham town hall at the same time. I filmed her on her phone as she addressed the morning and afternoon assemblies. It is amazing what modern technology can achieve.
Posted by John Gray at Friday, February 15, 2019

I have just read this.
Was there someone else who stood on stage to welcome others to the conference?

Thank you for this write up with regard to Labour Local Government association Conference 2019.

Just to ask at the start of conference did anyone else open up to welcome you to the conference and to Warwick?

I believe someone did. Perhaps you could remind me :-)

Thankyou for coming back to me. It was me who opened up to welcome fellow Councillors etc to the Conference. Jackie Taylor ALC Rep for the West Midlands. Our LGA leader Nick Forbes spoke after me.

You would ask you to correct your blog?
I understand that you may have been late for the conference I do not know. However, to give the impression that I did not speak as I was the first speaker to welcome others is not factual. Moreover, this is on the programme.
I look forward to your response. Regards Jackie

Updated. I think I was late into the hall. There are a number of speakers that I did not mention. The blog was only a quick snapshot of a long, busy day but thanks for the correction.

Thanks John, I know your write up was a snap shot. But for me and others if speaking about the welcome then I did welcome. Kind
Regards Jackie