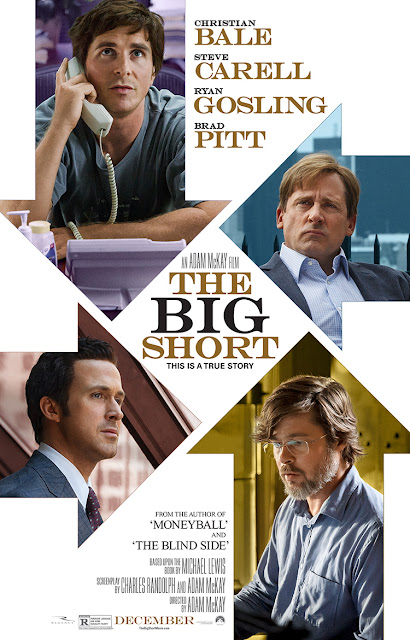 I finally got around to watching the 2015 film "The Big Short" on Netflix last night.  If you ever want an insight on the reasons why there was a huge international financial crash in 2007/08 (the effects of which are still with us today) then do watch this.

The criminality and corruption that led to the crash was staggering as was the stupidity of many so called "Masters of the Universe".

In America mortgages had been given (for fat commissions) to people who had no jobs nor sufficient income to pay for them. One example in the film was of a man who applied for a loan (which was granted) in the name of his pet dog!

These mortgages were bundled up together and sold as super safe "bonds" to other financial institutions such as as pension funds. There was certainly corrupt practices such as collusion to hide the truth about these bonds between debt rating agencies and banks as well as inadequate regulations.

But also these mortgage bonds were made so complicated that no one really understood them and few had any idea of the risks.

So eventually these bonds tanked as people defaulted on their mortgages, the prices collapsed and it drove out of business many financial institutions causing a worldwide depression.

The failure of the "left" to capitalise on this disaster and the years of austerity it caused has always astonished me. We had an "open goal" but in the UK we have lost the last 4 general elections since the crash.

Even worse I also have little doubt that this austerity weakened the NHS, public health and local government and contributed to the high levels of deaths that we suffered in the UK from Covid-19.

It is supposed to be based on "real life" but don't know how accurate the film was but I thought the acting was on the whole pretty good but there was a lot of macho male shouting and table banging. Which I suspect was all true. It was an Academy award winner for "Best adapted screenplay" and had a number of nominations including "Best Picture".